You can try to say that you are a super-nerd or an uber geek or whatever but I’d have trouble believing you after meeting Jayme and David.  Their maternity session guest starred Jason Voorhees from Friday the 13th.  How many of you can say that?! 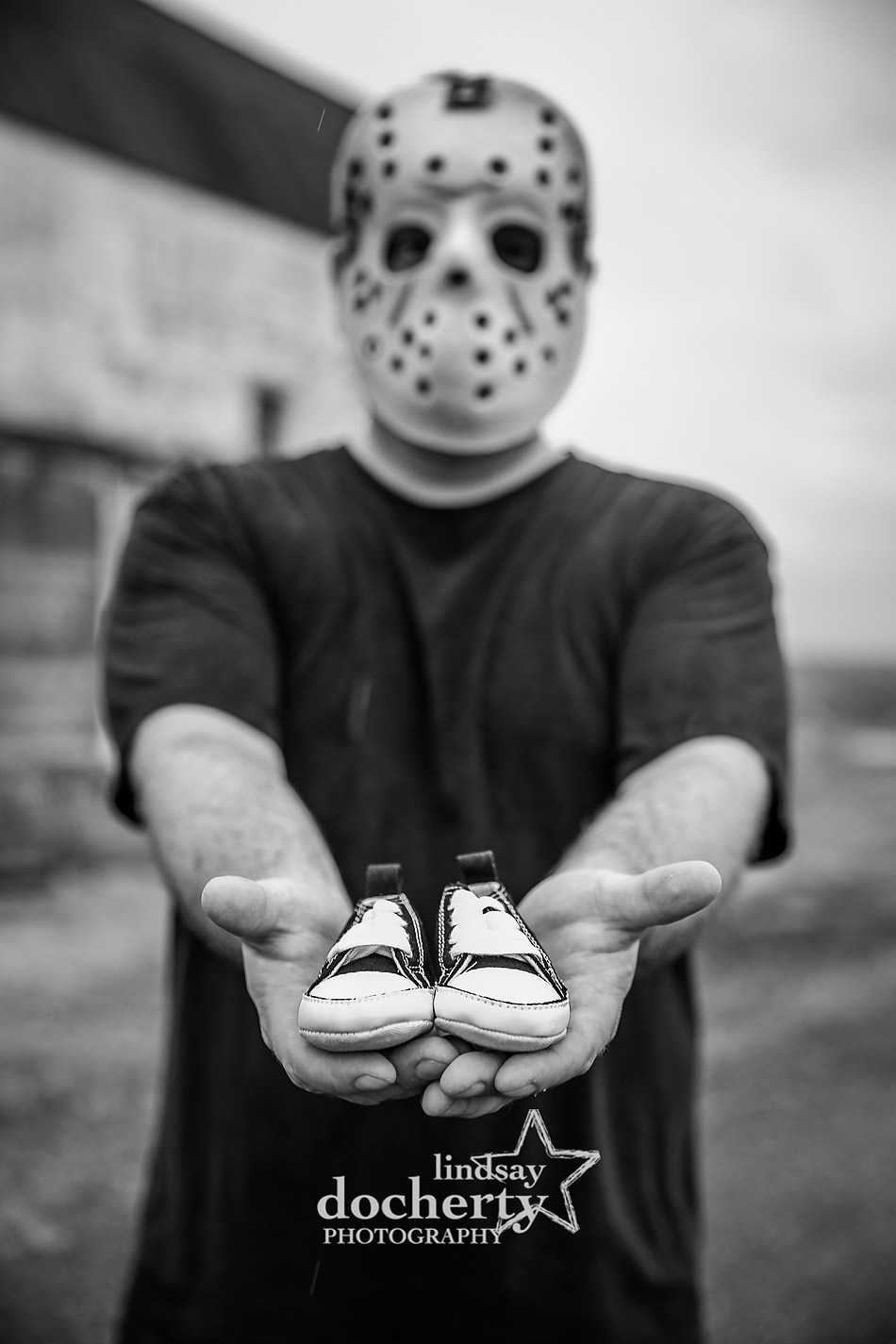 I don’t even know where to begin with these two.  How about Dave’s initial inquiry.  It went something like this:

We’re into horror movies (Exorcist is best movie ever), things blowing up (we watch Die Hard each Christmas, cuz it’s a damn good Christmas movie), whiskey (not for my wife right now), listening to loud metal, and falling asleep while getting tattoos because dammit that needle is soothing. We’re looking for something a little nutty and off the beaten path for these baby bump photos, but not quite enough that anyone would get hurt or arrested…much. 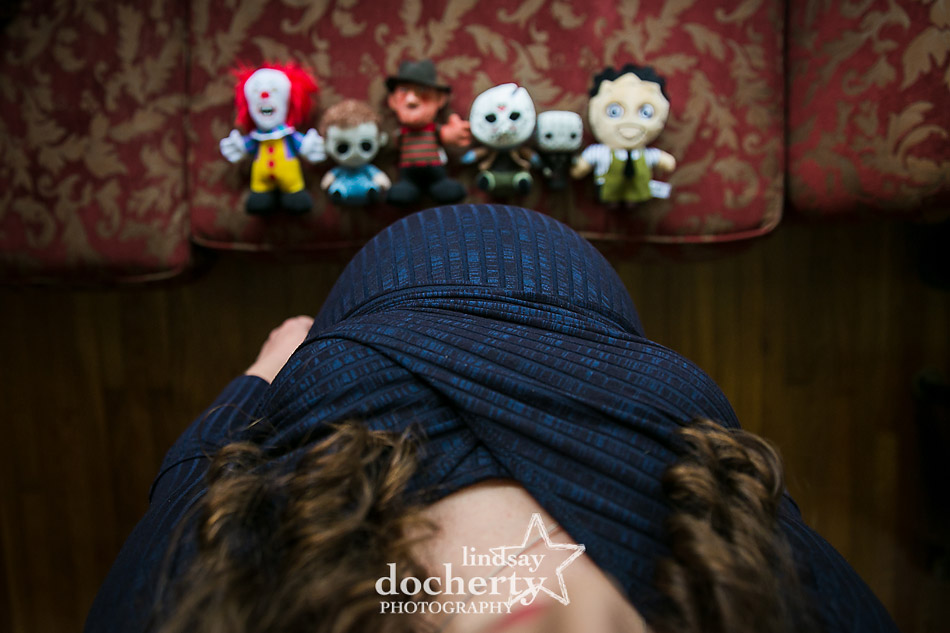 So… yeah.  That’s where the fun began and we took off from there.  I showed up at their house and was greeted by some turtles and epic awesomeness.  Check out this nursery! 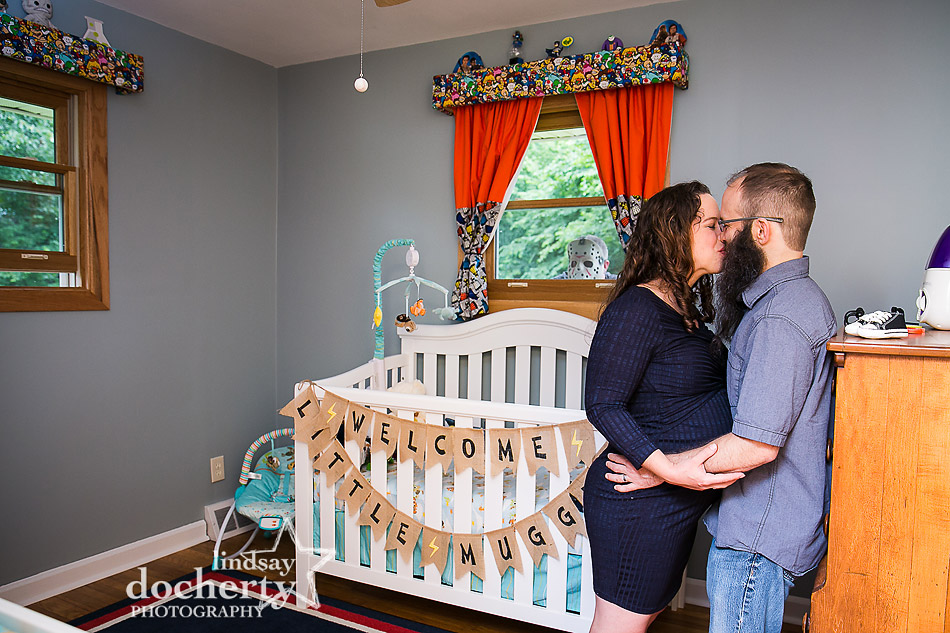 Please note the “Welcome Little Muggle” banner, the handmade valances starring all of the Mario characters, assorted Batman and Star Wars figurines and, if you look closely, you’ll see Doctor Who’s Daleks on the curtains.  Too many fandoms to pick just one.  These two are not fooling around! 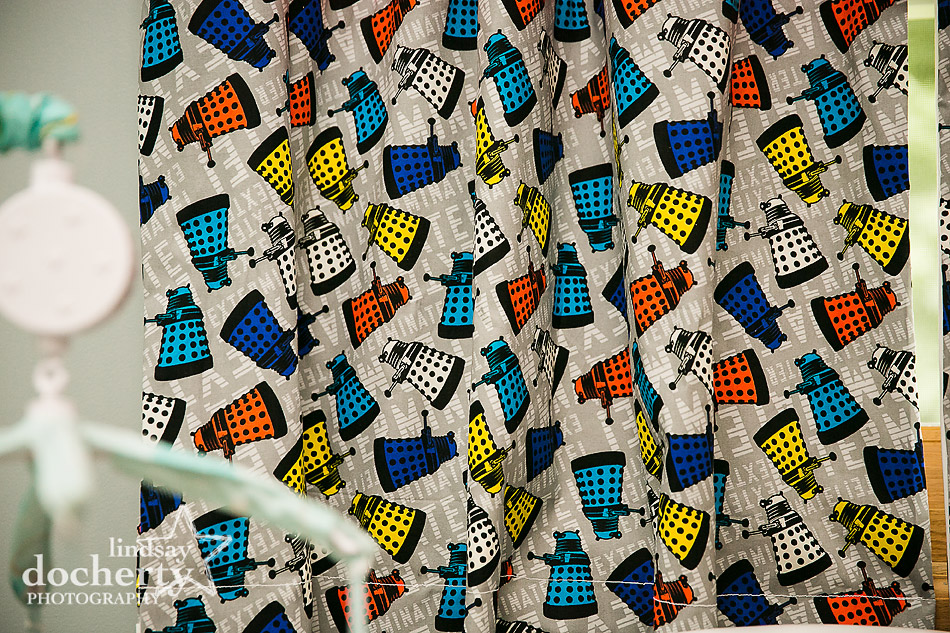 It was important to Dave that we spend some time reading to the baby.  They are not finding out the sex so they refer to it as “Spawn.”  How darling!  His favorite nighty-night books include Preacher and 30 Days of Night comics.  They’re about demons and vampires.  NBD. 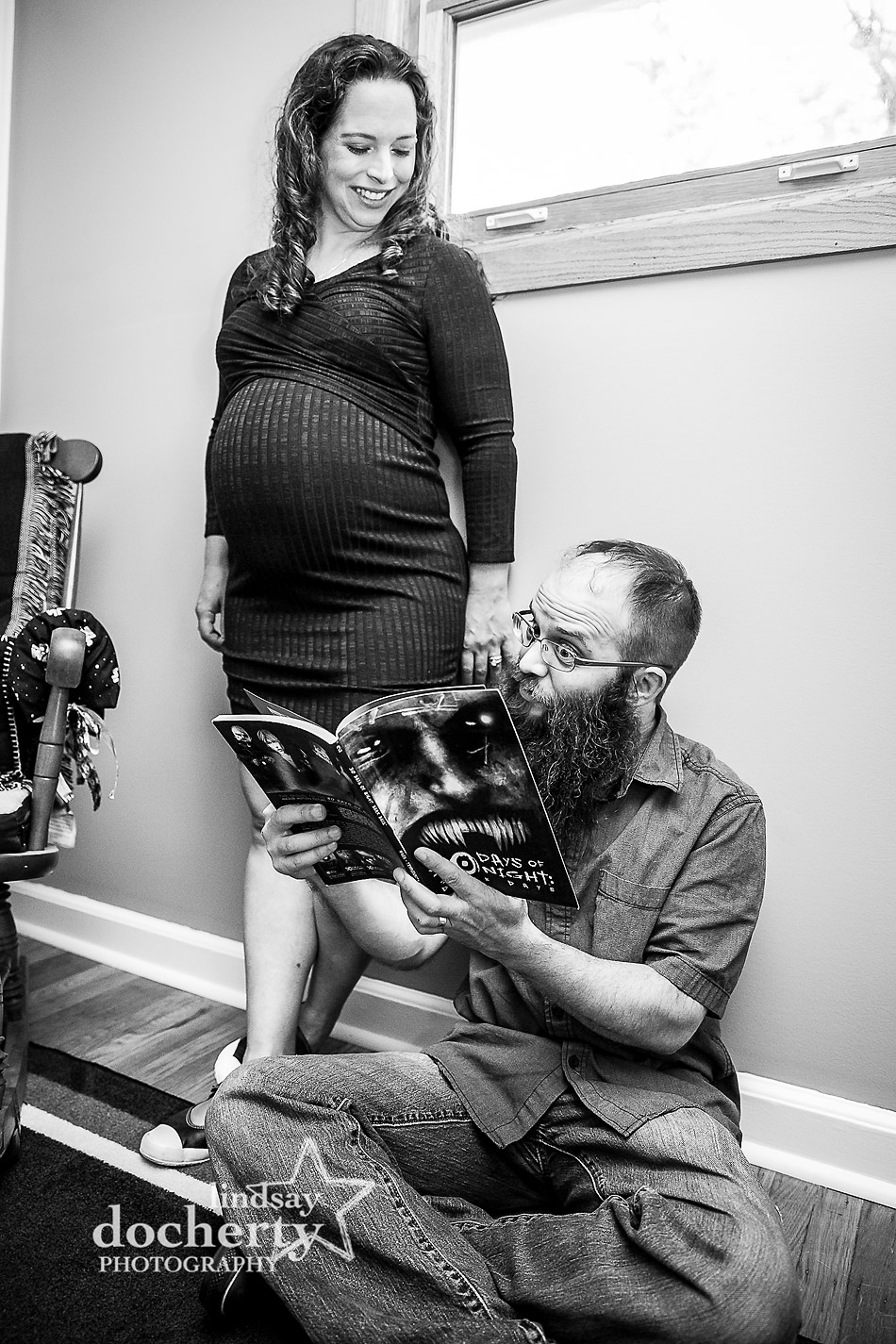 They also wanted to images of their normal life, a lot of which is spent as gamers.  They announced their pregnancy to family and friends with a picture of some baby chucks and a note, “Player 3 loading.” 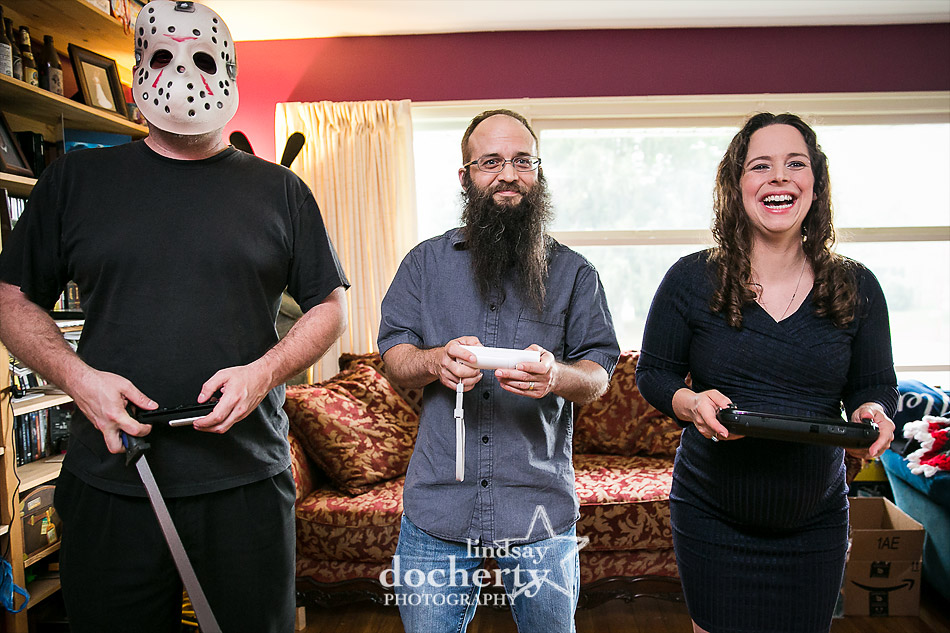 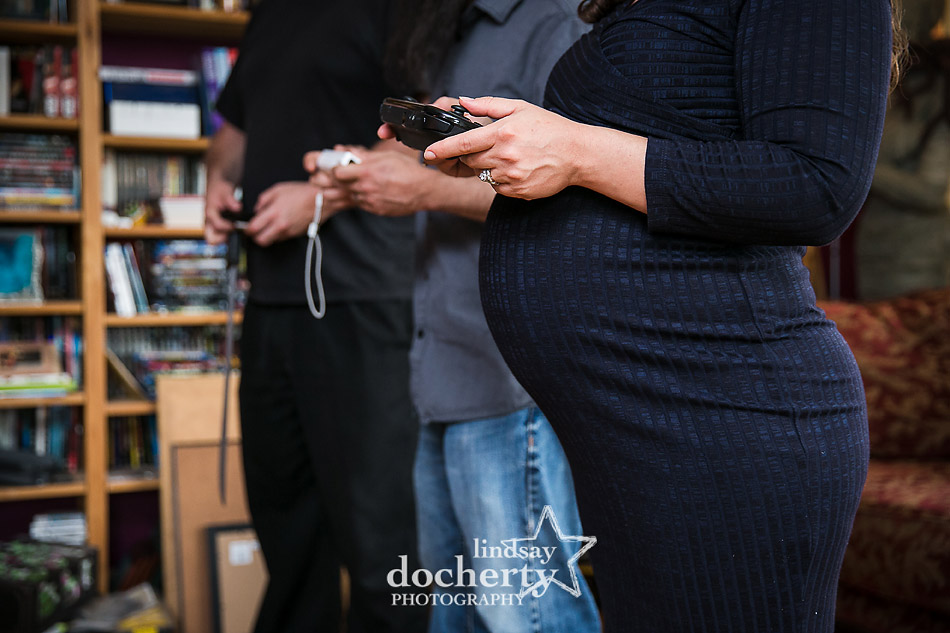 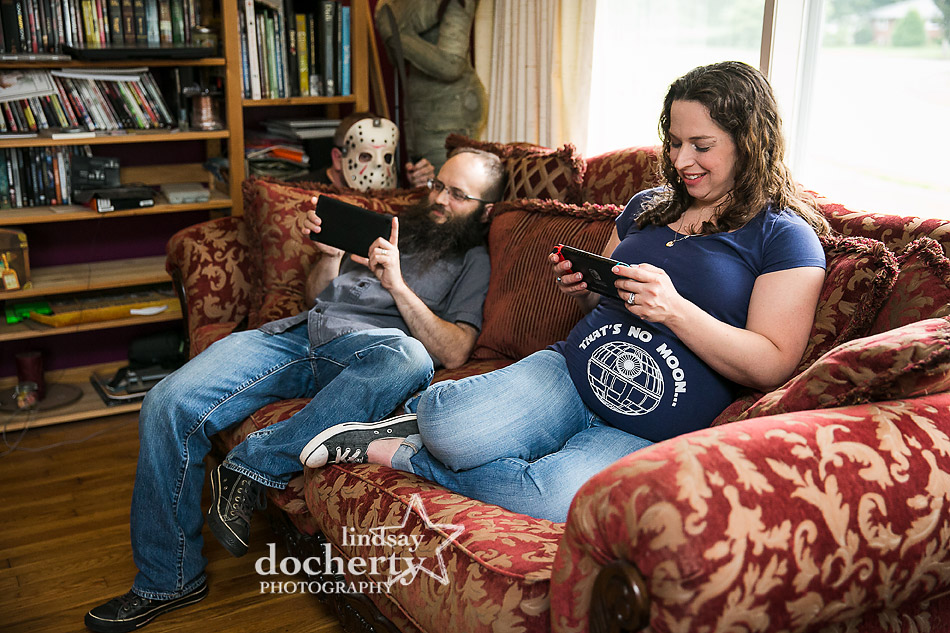 After a quick change (nod to Star Wars), we went out in the drizzly rain for more adventuring. 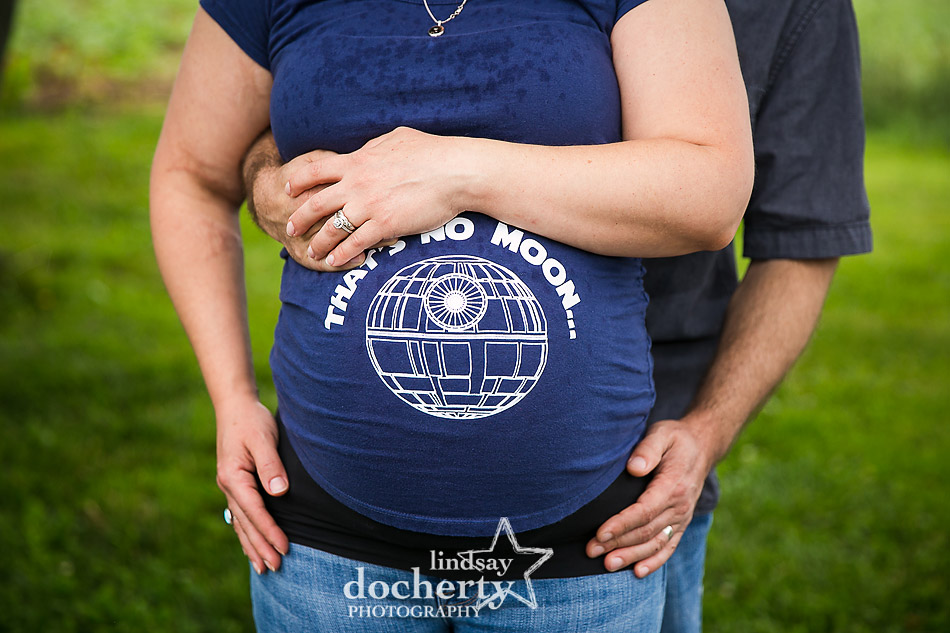 Speaking of Star Wars, please bask in the genius of the way Jayme told Dave about the pregnancy over the holidays!  (Jayme’s pictures)  As if you couldn’t tell, that’s a DARTH VADER CHRISTMAS TREE! And a sign that says, “David, you will be a father.” 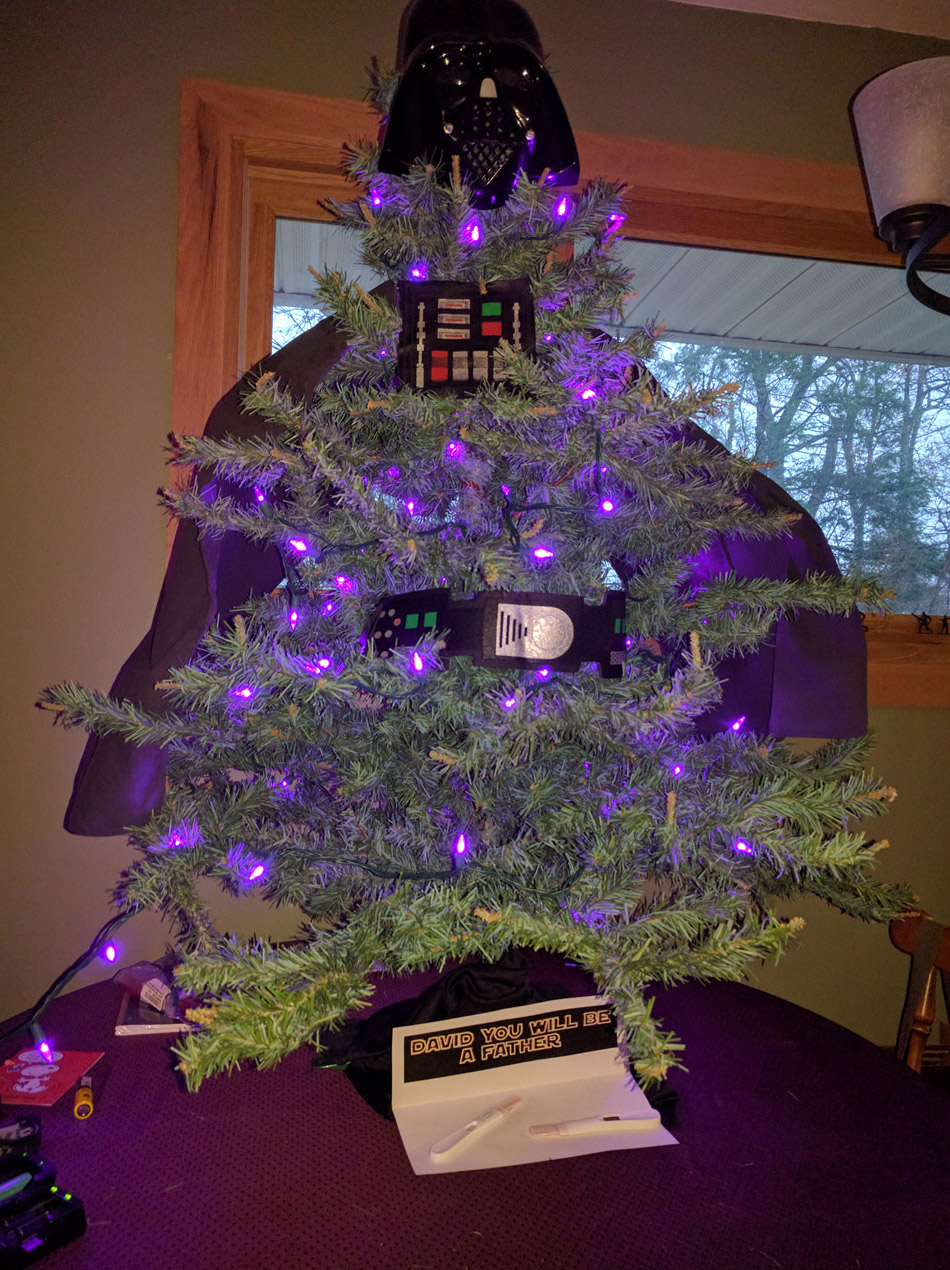 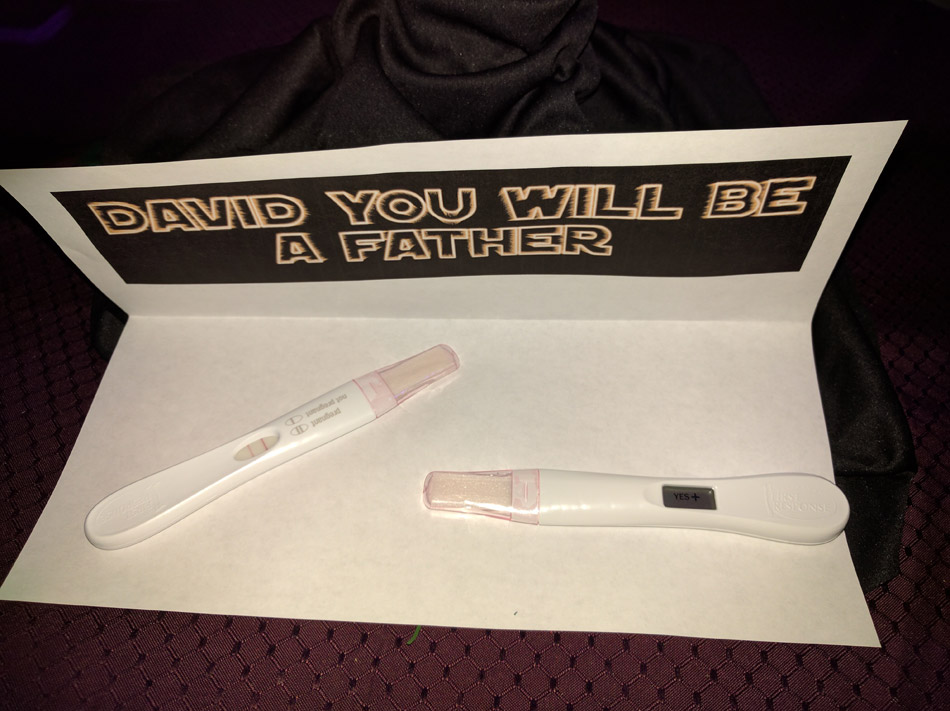 Jayme spent her pregnancy craving chips and salsa and continuing bootcamp classes up til the end.  She’s hardcore but that was already pretty obvious. 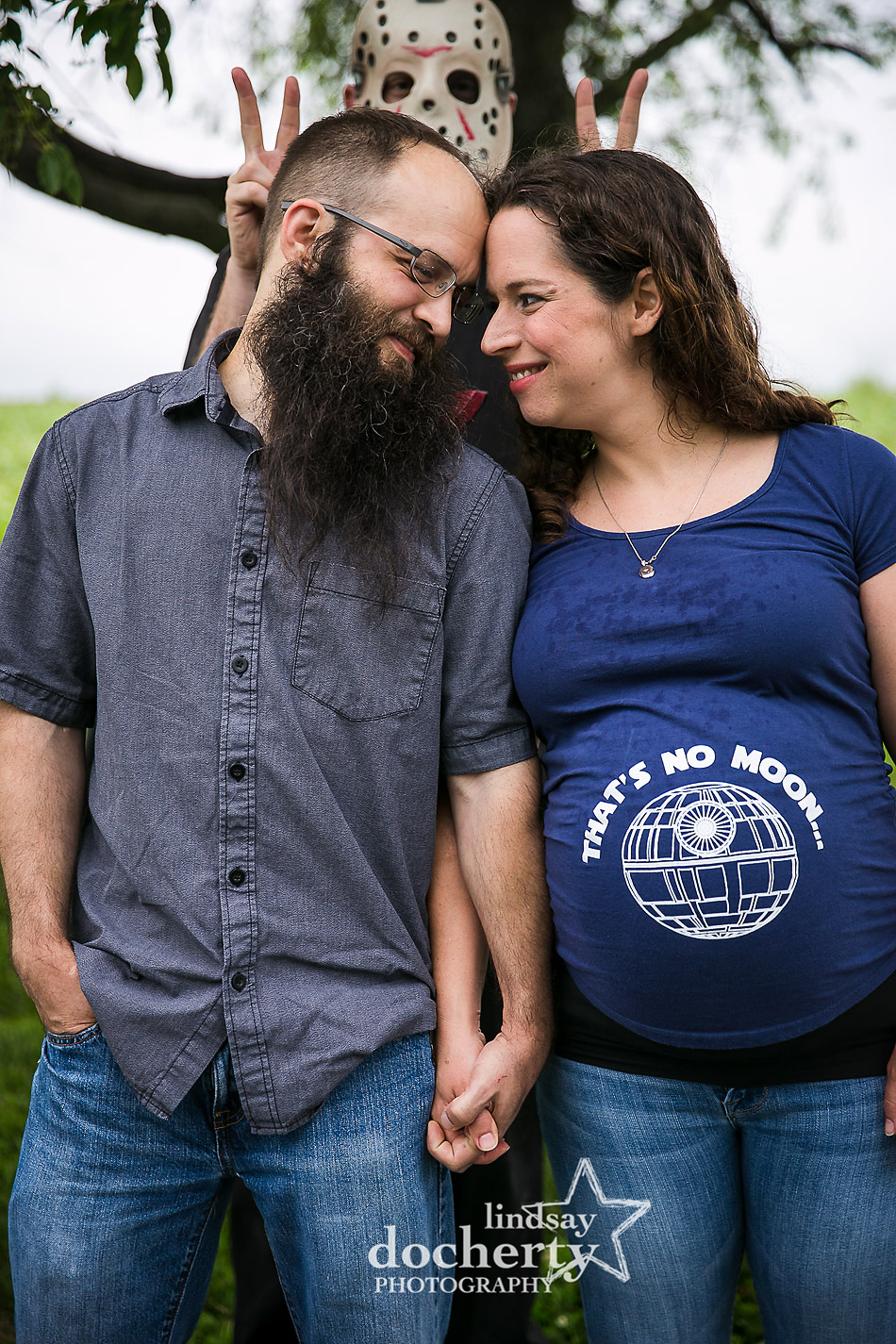 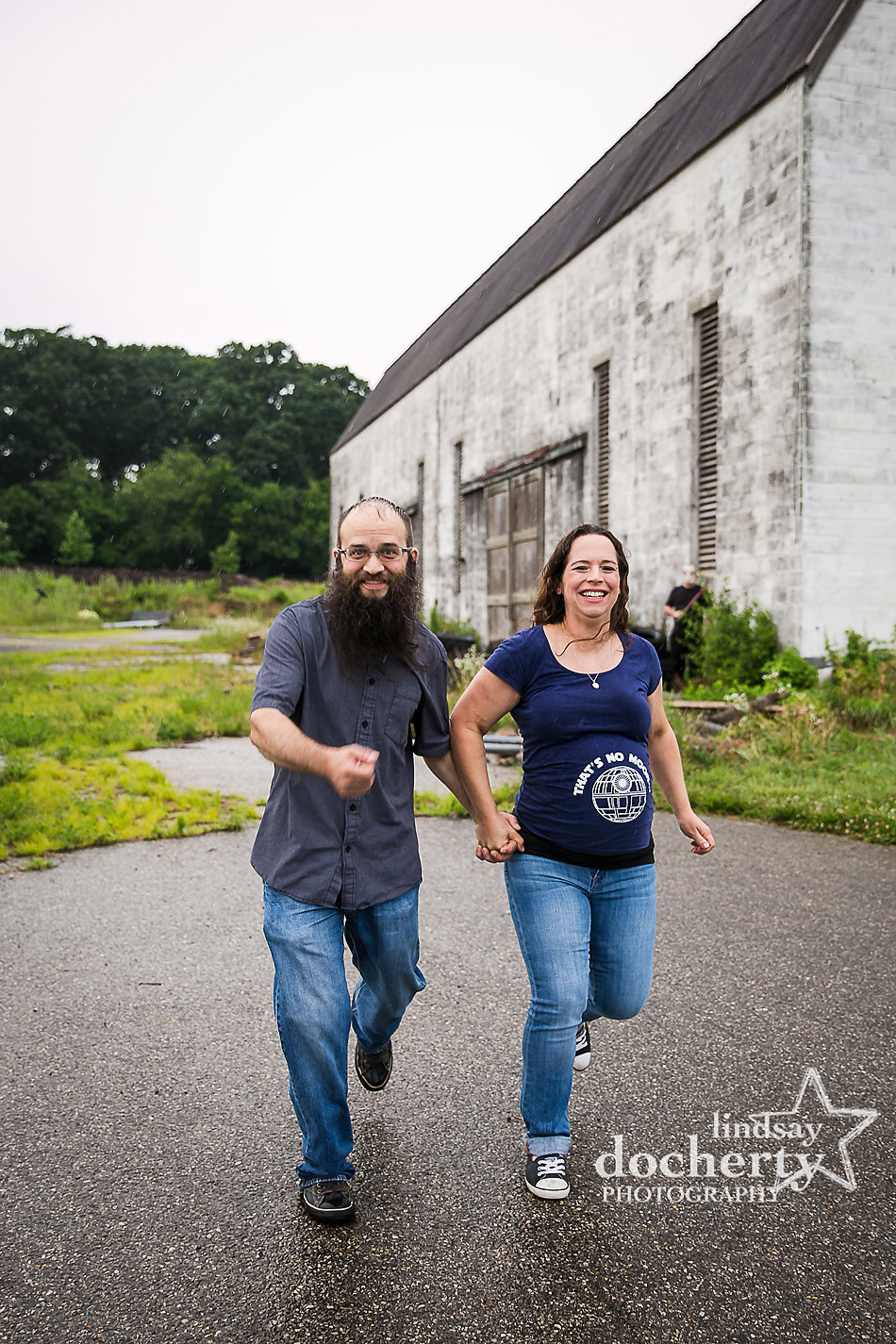 David and Jayme met online (duh).  Their first date was to a Tool show and their second was to the Mutter Museum.  It makes sense that their wedding was right around Halloween with costumes encouraged. 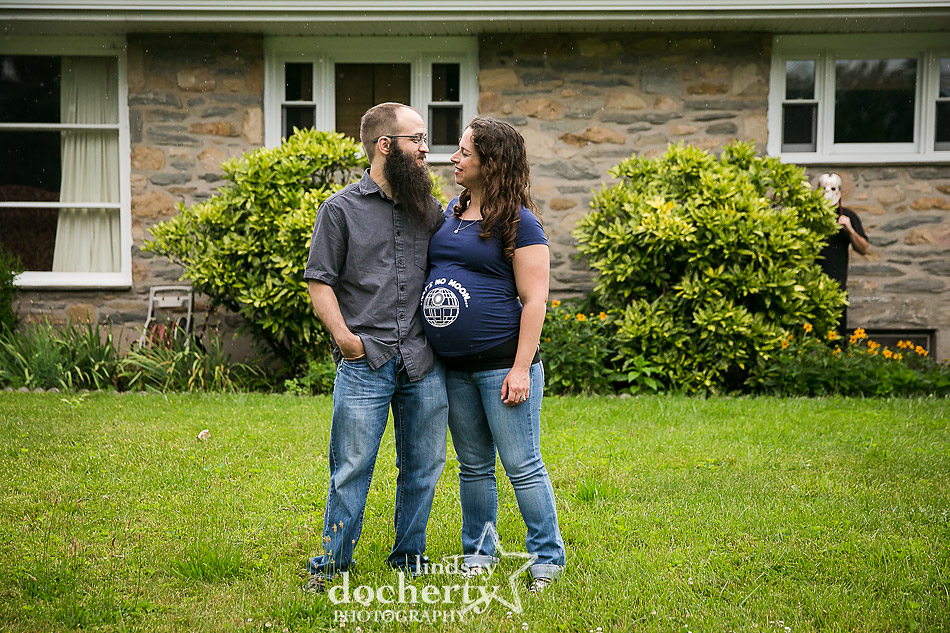 These two are something else!  They might not even be human but who am I to judge?  At the end of the session they asked, “is this the weirdest maternity session you’ve ever done?”  “Um, yes,” I replied.  Then they high fived each other. 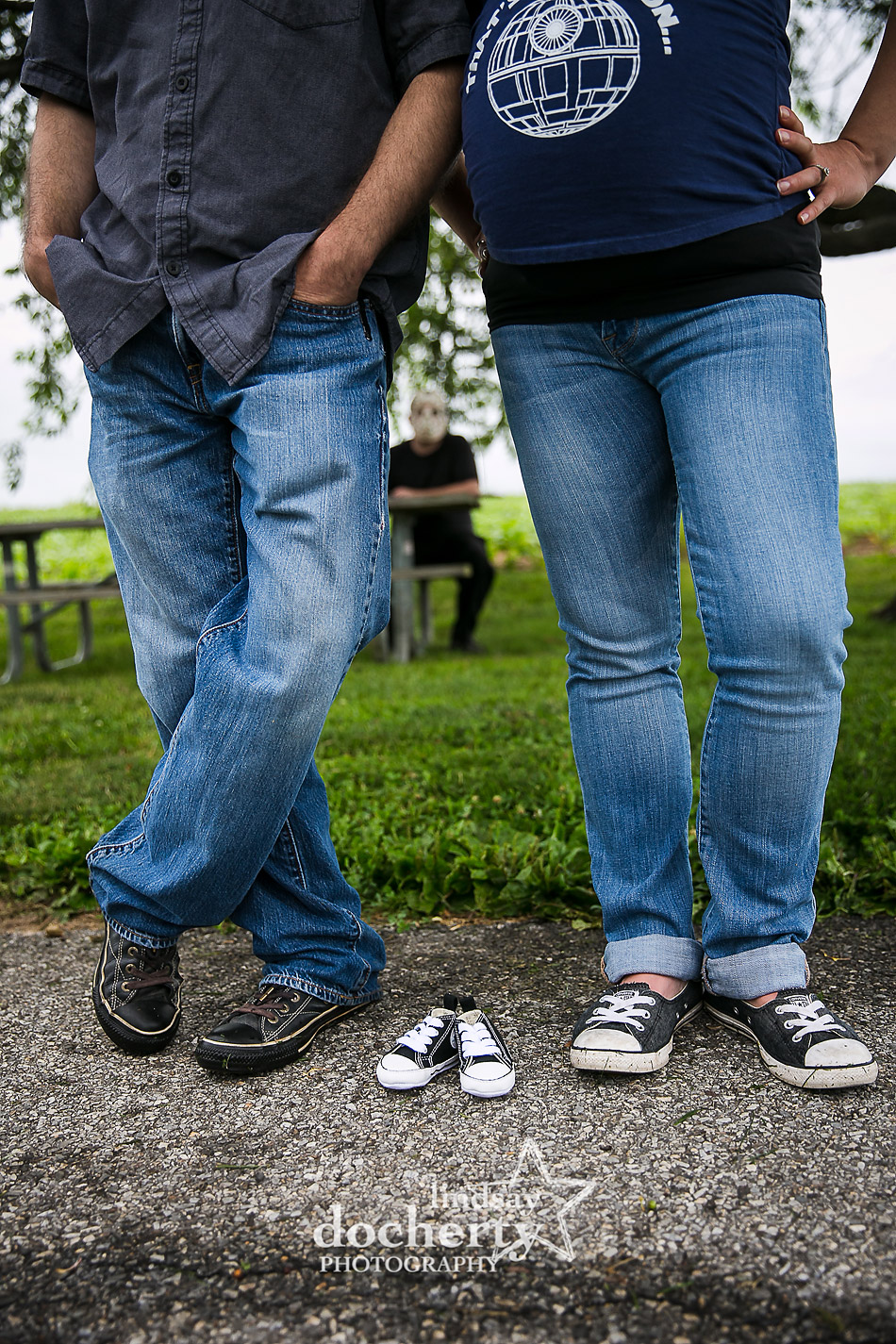 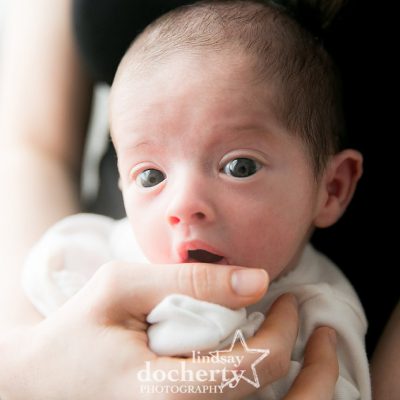 I photographed this Delaware mama twice recently.  Today I’m sharing her maternity session at her home in Wilmington.  It was a surprise gift for hubby, James, who gushed about how gorgeous she was.  And she absolutely was! She had terrible morning sickness for the first 20 weeks but was otherwise doing great!  I met her at 37 weeks and she looked like this.  So freaking hot it's unfair! Her belly button was completely flat with fingers crossed that it wouldn’t pop to an outie. They waited until the birth to find out about the sex of the baby.  Til then, they called the baby “Little Foot.”  She felt like it was a girl.  Ja ...
Family May 4, 2017
May 4, 2017 ● Family
READ MORE 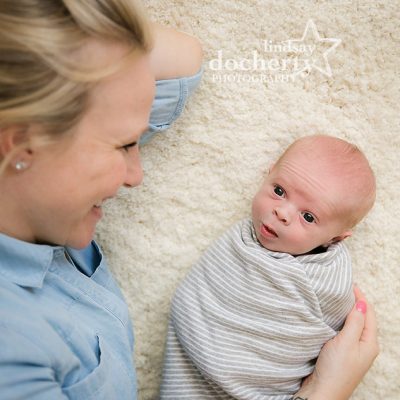 Little Miss Harper Laine stayed wide awake for practically our entire session at her home in Mt. Laurel, New Jersey last week.  I get it; when literally everything is new and you’re the star of a photoshoot, you want to hang out and see all that there is to see (within 6 inches of your face). This isn’t to say that she was upset.  Not in the least.  Harper was pleasant while I was there, showing off her gorgeous Pinterest-worthy nursery (teepee, DIY flower mobile, the softest color palette) and a few questionable/fashionable headpieces. New mom, Jeanette, looks fabulous whenever I see her.  She’s a total workaholic and this was ...
Family June 28, 2017
June 28, 2017 ● Family
READ MORE