Rittenhouse Square is classic Philly and I have been there many, many times for engagement sessions because it’s so iconic. Abby and Eli picked the area because it’s theirs. They live here and know the streets, houses, dogs, and shops. These are my favorite kinds of engagement sessions because I don’t just get to see two people in love, I get to see them in their place.

We wandered around and hit up some of their favorite local spots. Goji, a happily prancing 1.5 year old shiba ino/jindo mix, escorted us. 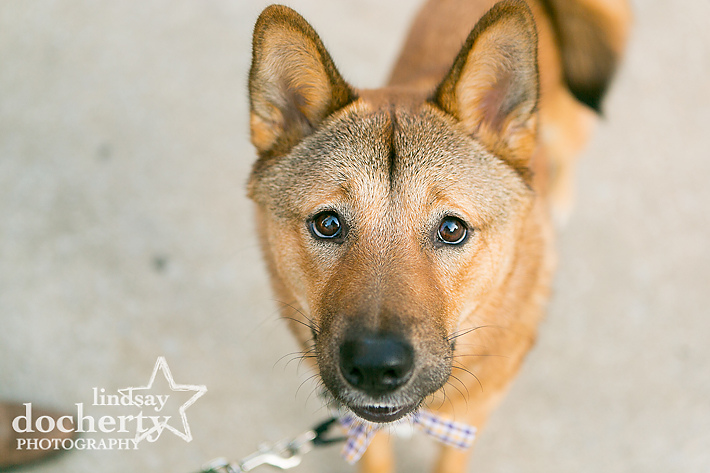 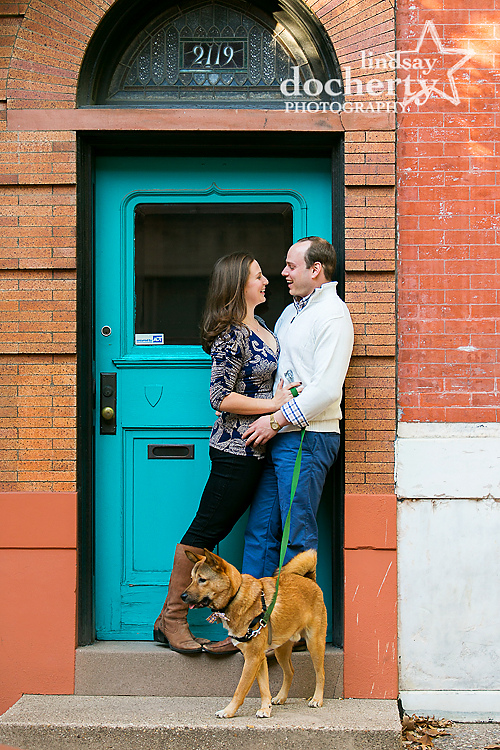 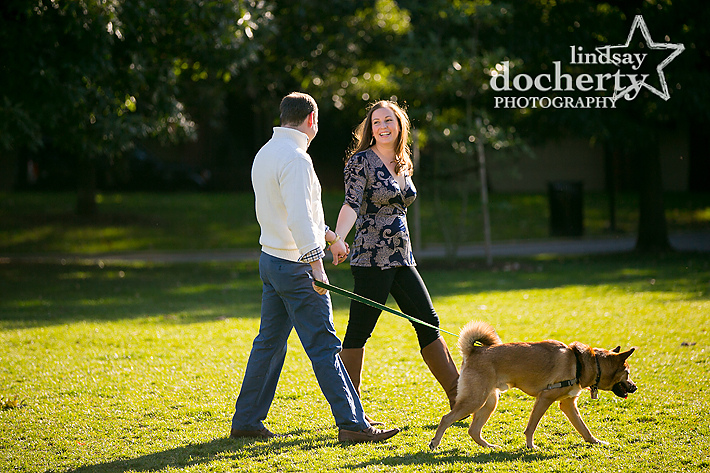 Just look at this face! Ahhhh! And bow tie! 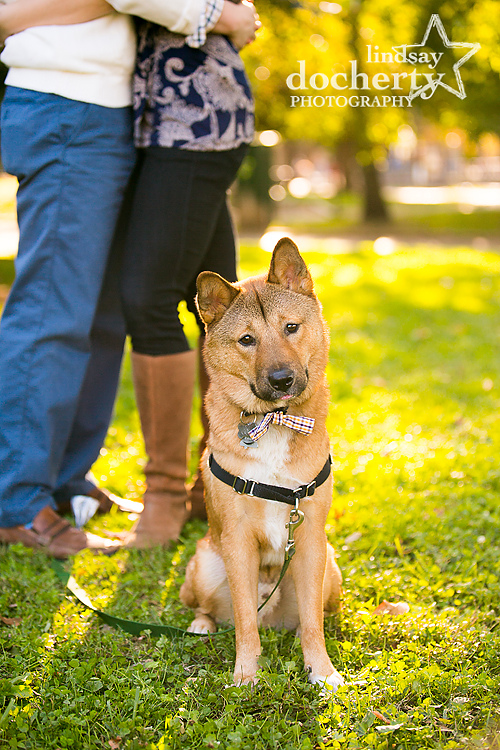 These two are really amazing together. They met at her roommate’s birthday party. She was Eli’s friend as well. It wasn’t meant to be at the time but Eli called on her later for some drinks as a “trial date”. It obviously went well. They’re amazed but they told me that they don’t get tired of each other’s company.

Abby and Eli knew the routes to some of the best views of the city. 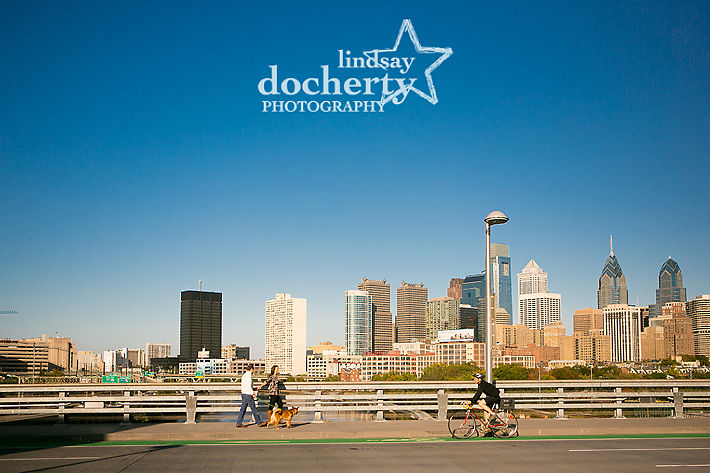 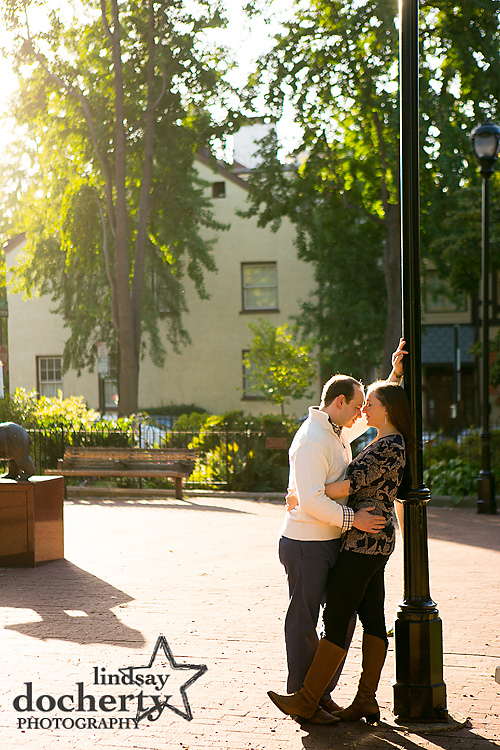 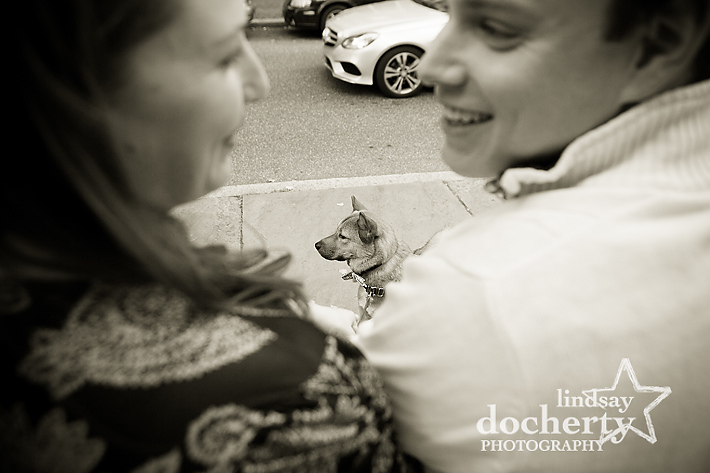 Their proposal story is the kind of thing you see on awesome YouTube videos. Abby was getting a mani-pedi with her friend who had a wedding later that day. They left the salon to find a limo outside waiting for them. Abby then continued on a scavenger hunt all over the city, stopping at places that held special significance to their relationship and picking up clues from friends and family. The final clue led her back to their apartment where she found rose petals leading from the elevator to the door where Eli was inside on one knee with a ring. Swoon! They met friends and family afterwards and then had dinner together at Pumpkin, which is kind of a hazy memory due to the day’s champagne consumption. 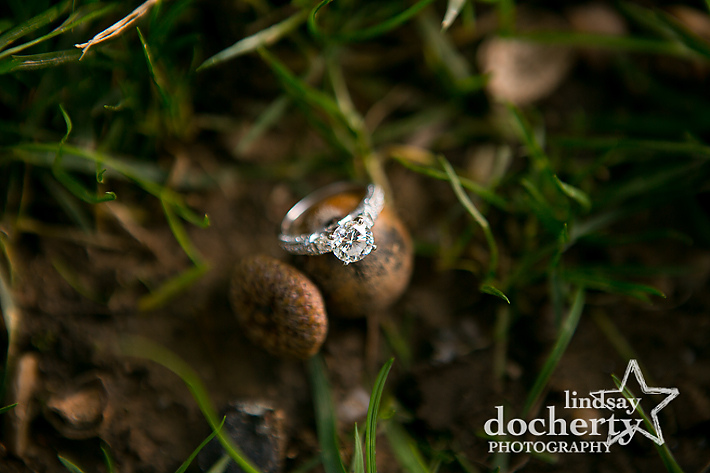 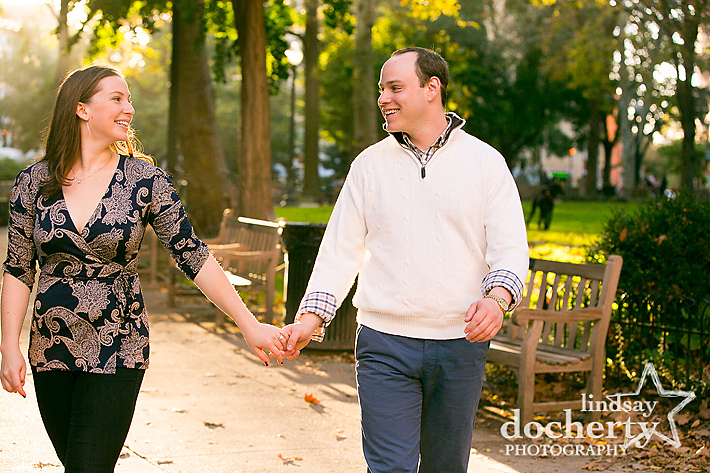 The second to last stop on Abby’s engagement escapade was the fro yo place at their corner. You could say that this is a pretty regular indulgence. 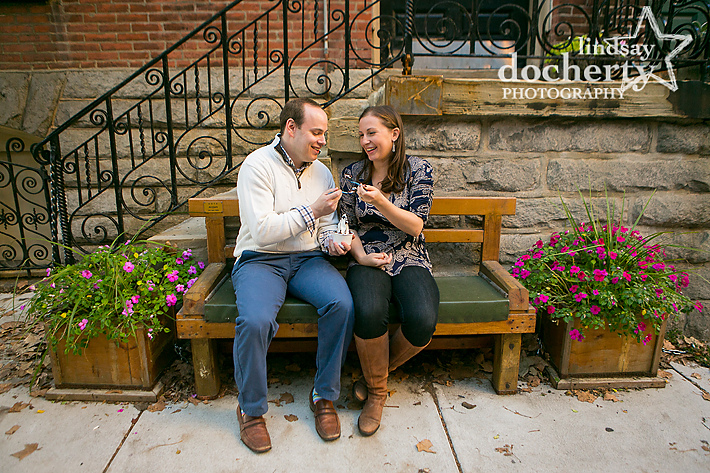 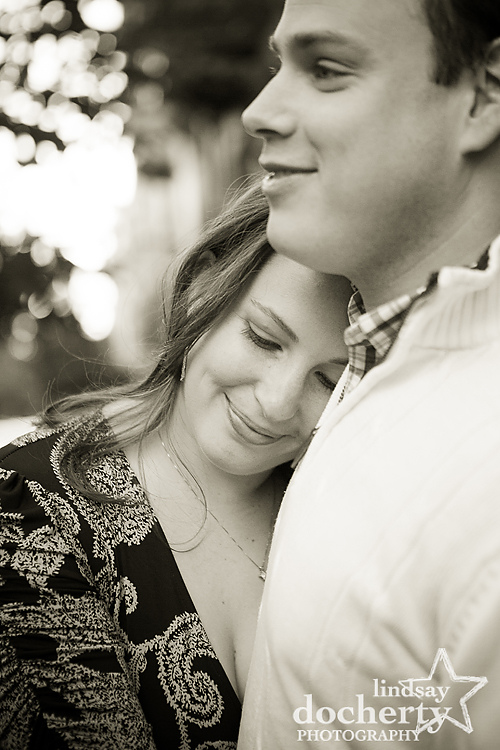 I can’t wait to see them again in May for their wedding at Peche Sherman Mills! 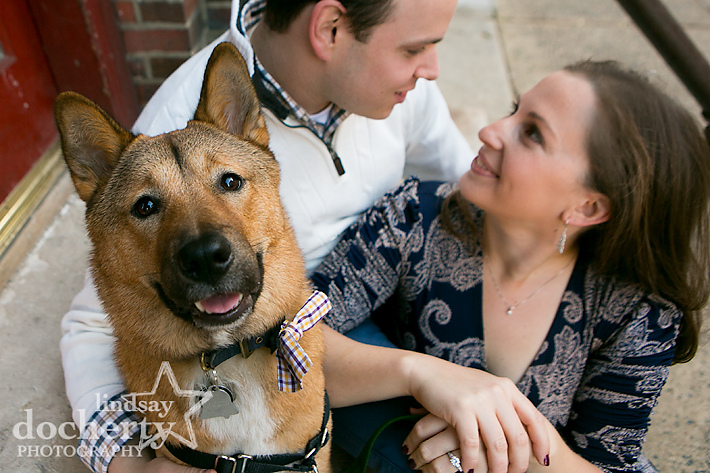 “I do not have any other way of saying it. I think it happens but once and only to the very young when it feels like your skin could ignite at the mere touch of another person. You get to love like that but once.”
~ Pat Conroy, Beach Music 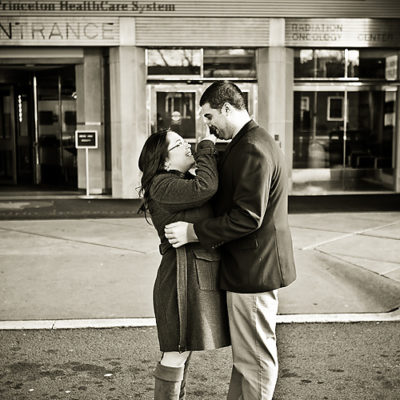 It’s the age old love story. She was a nurse; he was a resident. She had her eyes on him and asked if he wanted to go out one night. They went to Triumph Brewery in Princeton, down the street from the hospital, and conversation was so easy. The date that night and all of them since them have been so good that they’ll be celebrating their wedding next month at Knowlton Mansion in Philadelphia.These two have a thing for cooking that made me want to invite myself over to their place for dinner. Casey apparently makes a pretty mean mac and cheese and can rock some pancakes. Eric’s got the omelets. They made a rack of lamb for Valentine’s D ...
Engagement March 20, 2012
March 20, 2012 ● Engagement
READ MORE 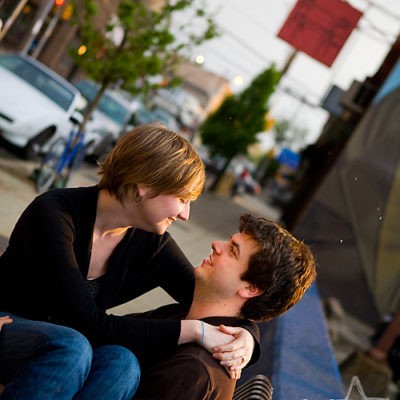 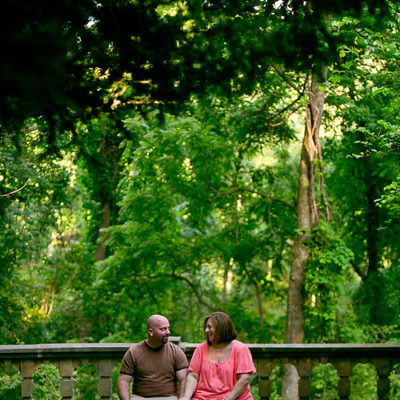 It wasn’t very long ago that I was contacted by the organization Wish Upon a Wedding to photograph Jared and Stacy’s wedding. Wish Upon a Wedding is a nonprofit wish granting organization that provides weddings for couples facing terminal illnesses and serious life-altering circumstances. There have only been a handful of these weddings in Philadelphia and there are scores of wedding photographers signed up as members so I was truly humbled to be asked to be a part of this incredible experience.Stacy and Jared met at a Nascar race. She was there for the race; he was there for the beer. It started raining and Jared’s group was invited to s ...
Engagement June 28, 2012
June 28, 2012 ● Engagement
READ MORE