I have met many low key, laid back brides but none of them hold a candle to Mika. She and Joe were married at Philadelphia’s Bartram’s Garden with 10 of their closest family members in attendance. 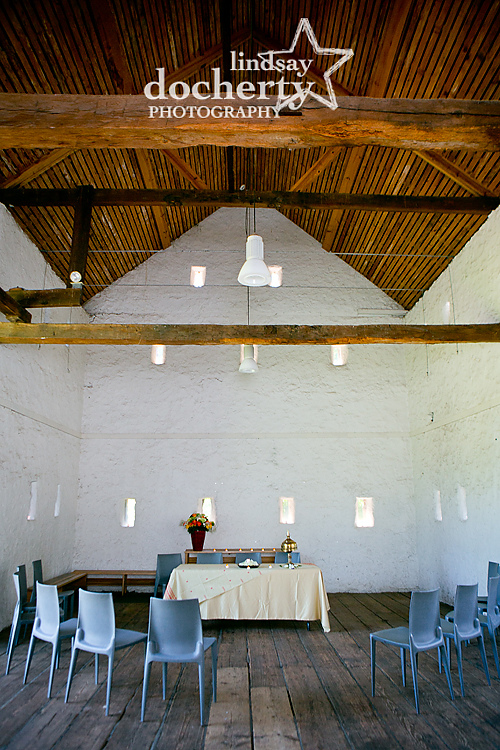 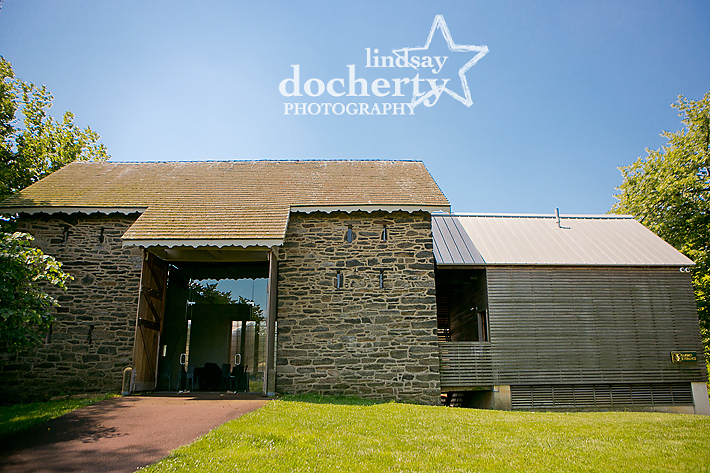 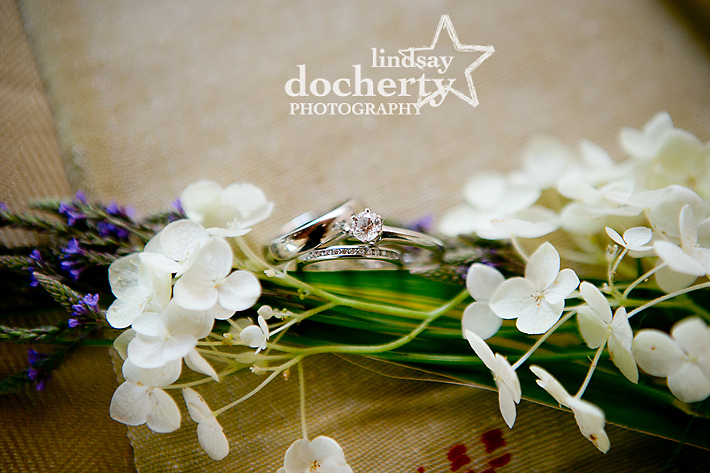 The oil lamp at their ceremony table was the same one her parent’s had at their wedding.

Just a few highlights about Mika:

They had a self-uniting ceremony (thanks to the wonders of Pennsylvania weddings!) with Sanskrit readings by her Hindu grandmother. 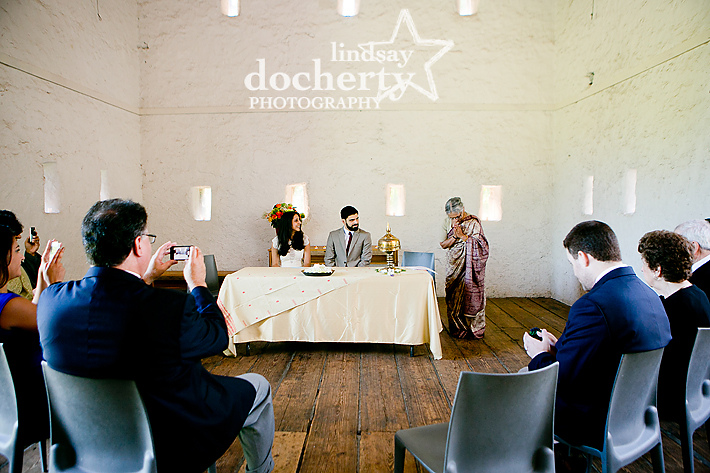 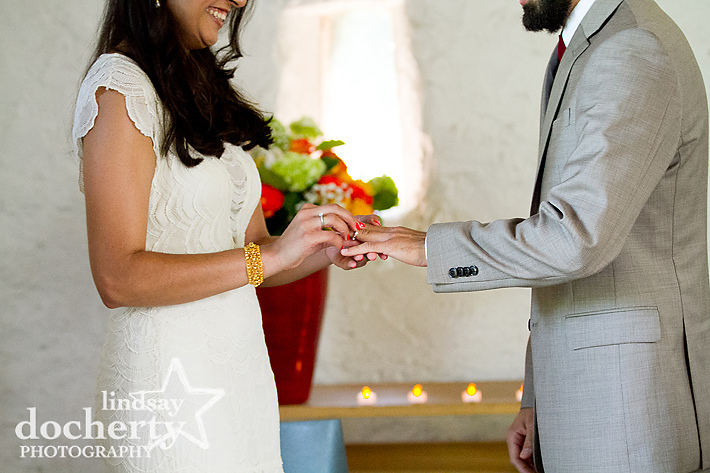 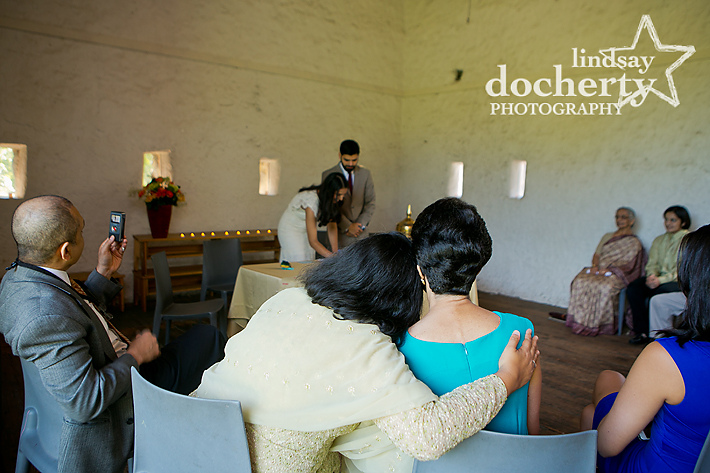 They celebrated with champagne, strawberries, and a blueberry cake. 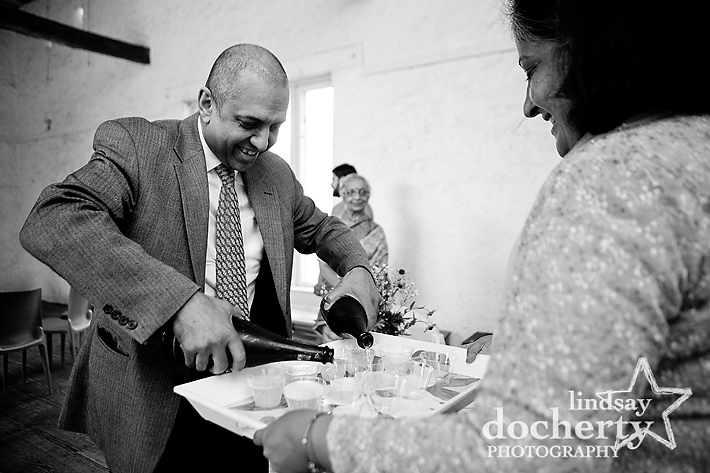 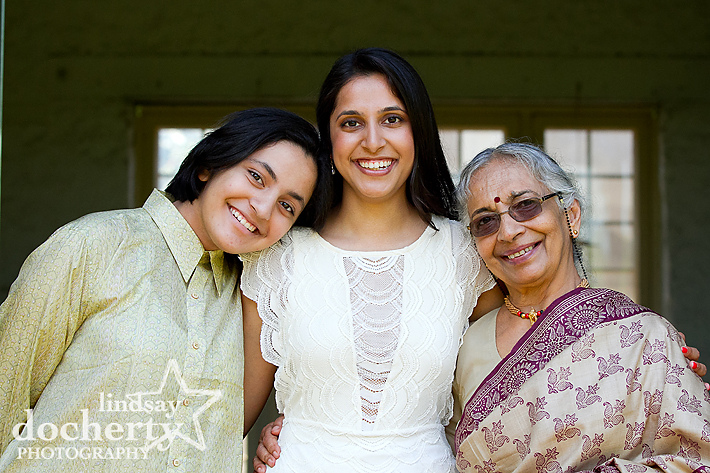 After some family formals, I had the couple to myself to wander around the lush property. It was the middle of the day and the day was hot. I appreciate that they indulged me in wandering all over the place. 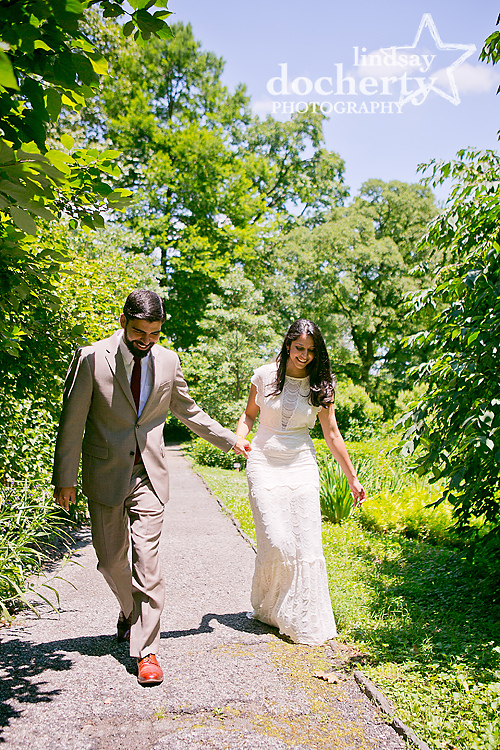 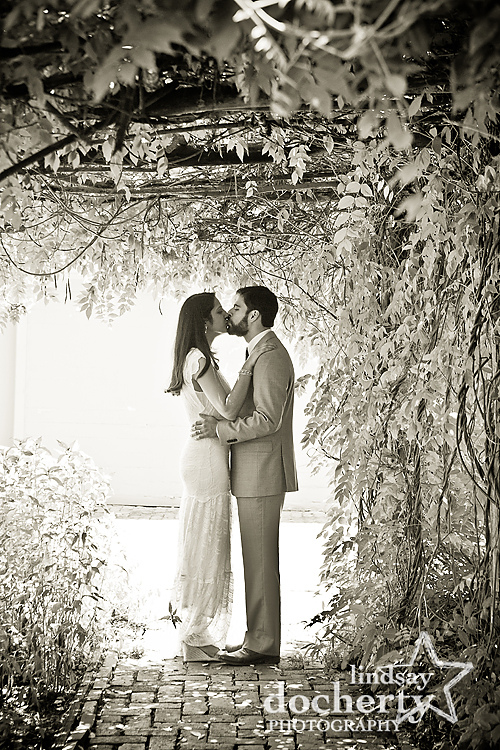 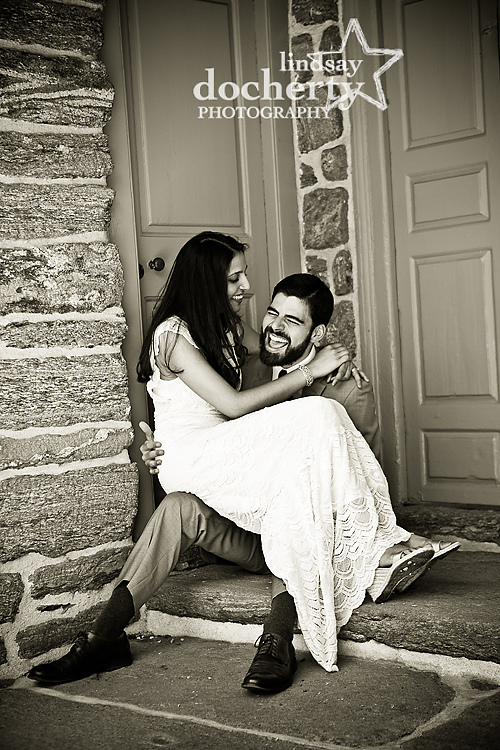 I’m pretty sure this place has it all – from gardens to waterfront views to the Philly skyline. 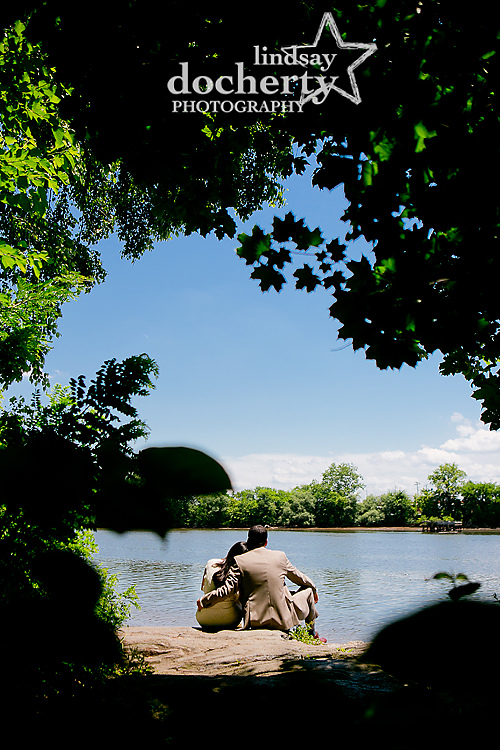 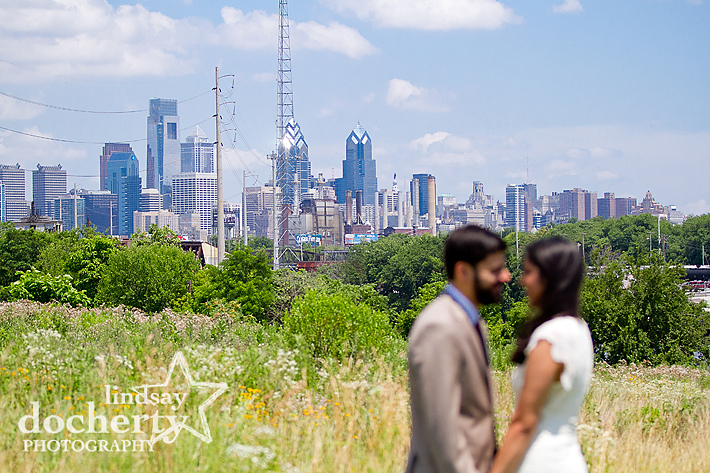 I learned that they first met 6.5 years ago while living in the same dorm at Georgetown. They were friends first but it eventually morphed into more. Their first date was to a Wendy’s because he couldn’t believe that she had never been to one before. 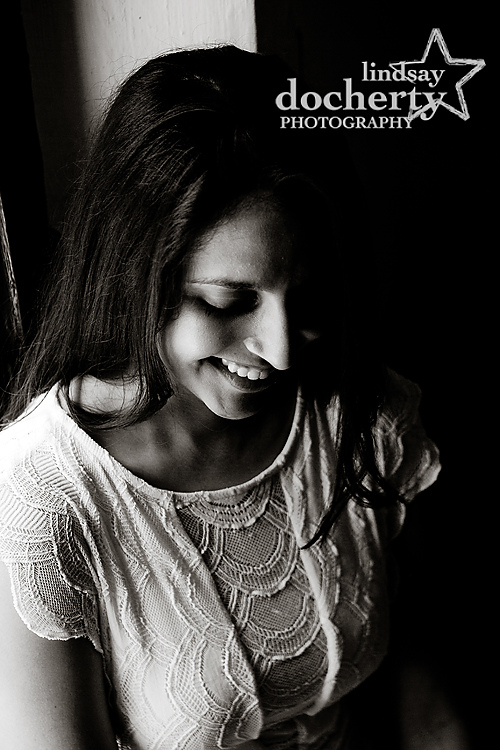 He lives in DC and she is still finishing law school in New York City, where Joe proposed. He took her to dinner (Le Bernardin but I could be wrong) and got a suite at the Ritz Carlton where the entire staff was in on it. 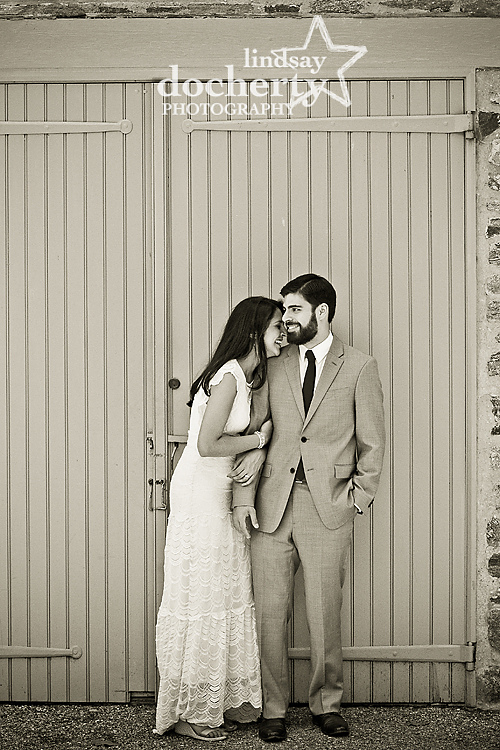 In September he’ll be leaving for Afghanistan for work with the Foreign Service. When he returns they’ll jetset around the globe together. 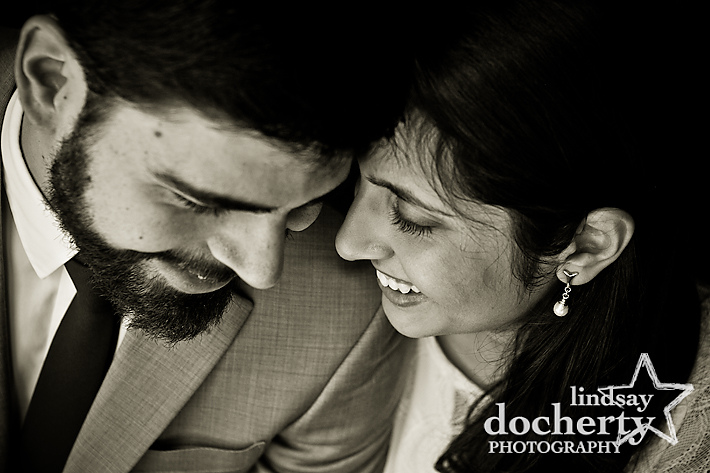 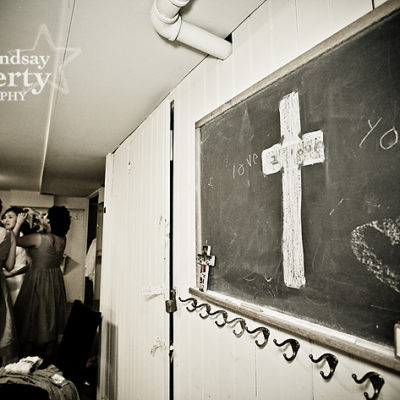 You may remember this adorable couple from their sweet, wintery engagement session at Longwood Gardens. Haesook and Wayne were married in March in one of the most interesting ceremonies I’ve ever witnessed.We met up at the Church of the Messiah in Gwynedd. Due to some small mishap, we weren’t able to get into the church til about an hour before the ceremony began. Bridesmaids were getting ready in cars. Haesook and Wayne were cool as cucumbers.The ladies got ready downstairs. Haesook wore a sleek Vera Wang silk and organza gown that looked lovely on her petite frame. And I adored the bridesmaids’ outfits! They were outfitted in grey te ...
Wedding April 16, 2011
April 16, 2011 ● Wedding
READ MORE 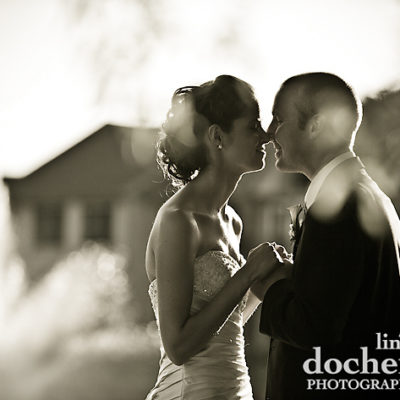 Andrea and John moved together like a couple who have been together for eons. Maybe that’s what happens when you’ve known each other since 6th grade. Their wedding this weekend at St. Norbert’s Church in Paoli (where they met) and Chester Valley Golf Club in Malvern felt natural. Here’s a taste of what’s to come!
Wedding May 23, 2012
May 23, 2012 ● Wedding
READ MORE 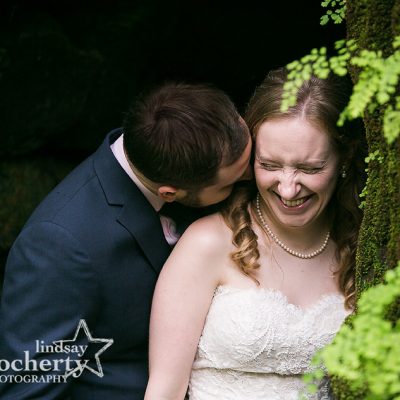 I’m going to go backwards with this one.  I’m going to show you the wedding before the engagement pictures.  So be prepared for a two-parter.  You’ll understand soon enough! (Update here!) Amy and Zach were married at Morris Arboretum on a day that brought down sheets upon sheets of rain.  Think dark skies and monsoons and you have a bit of an idea. Zach and his gentlemen were coolly gathered at the hotel, sipping shmancy whiskey. Amy credits Zach with a lot of the design decisions.  He had an eye on the details.  I love the story behind his great grandfather’s cufflinks that his tomboy grandmother also wore with a suit ...
Wedding October 8, 2018
October 8, 2018 ● Wedding
READ MORE