Some people dread photography sessions. They worry they’re going to be making a really dumb face or that it’s going to be an excruciating experience with a lot of “turn your head just so and hold it for the next 30 minutes” or they’re just not too keen on having a camera pointed directly at them for an evening. I don’t know Brian’s reasoning but he was one of those people; he was completely nervous. What’s funny is that this group of people doesn’t take bad pictures. In fact, I would even say that this session would be in my top 5 of all time. Yeah, seriously. We didn’t hit up every Philadelphia attraction known to man, we didn’t go in with much of a plan, and we didn’t have people who are used to being in front of the camera. But we had fun.

We met up in Queen Village and wandered, poking around alleyways, inviting ourselves into people’s gardens (thanks, Margot!), and just laughing. A lot. It was pretty awesome.

Without further ado, I give you Clare and Brian, gorgeous and hilarious. 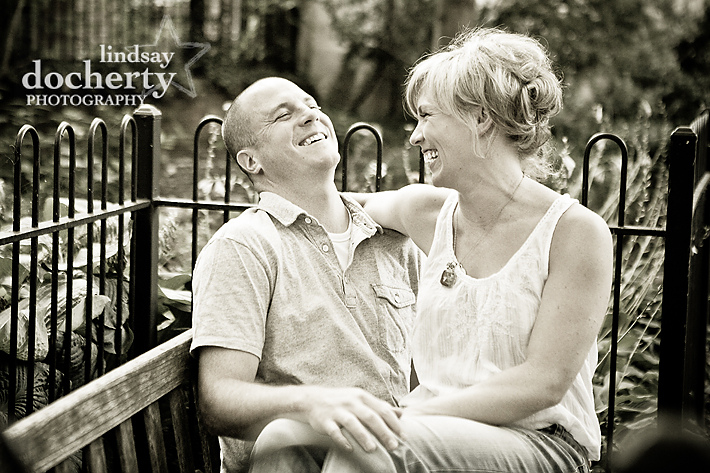 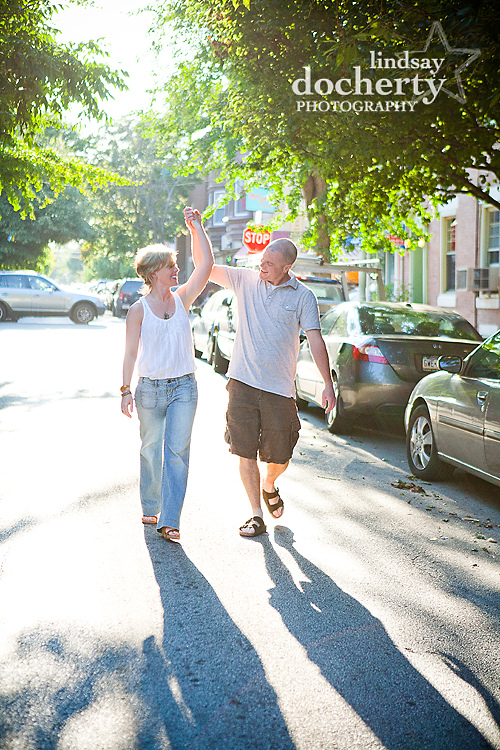 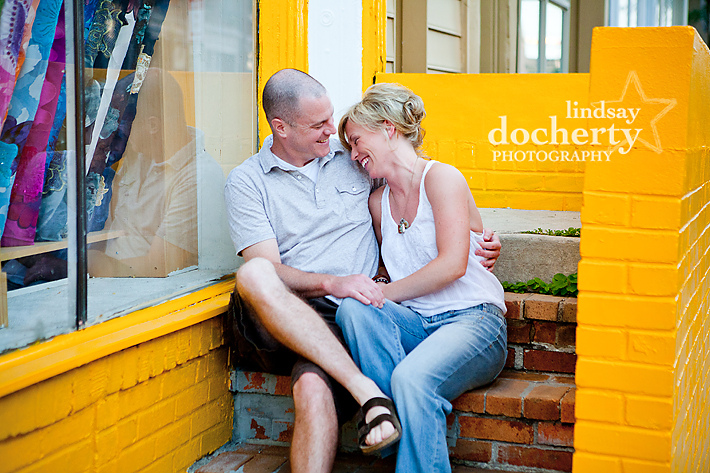 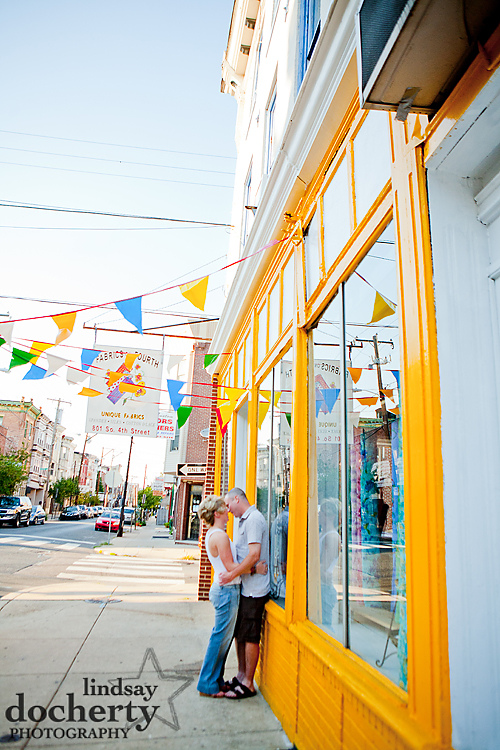 We considered finding the Philadelphia Magic Gardens but stumbled upon our own version on a little side street. 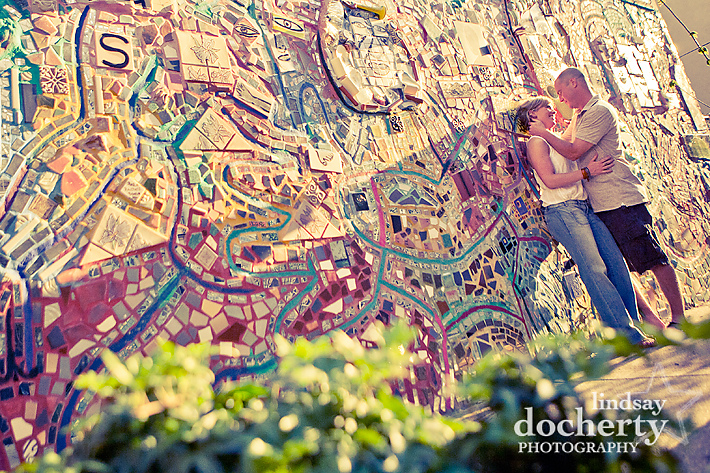 I try to learn a lot about couples during these sessions. For example, I know that Brian is a dog whisperer. And if that’s not entirely true, Brian likes talking to dogs. So there’s that.

Oh, and Brian and Clare are fierce. With enough prompting we were able to get Clare in touch with her inner bear. 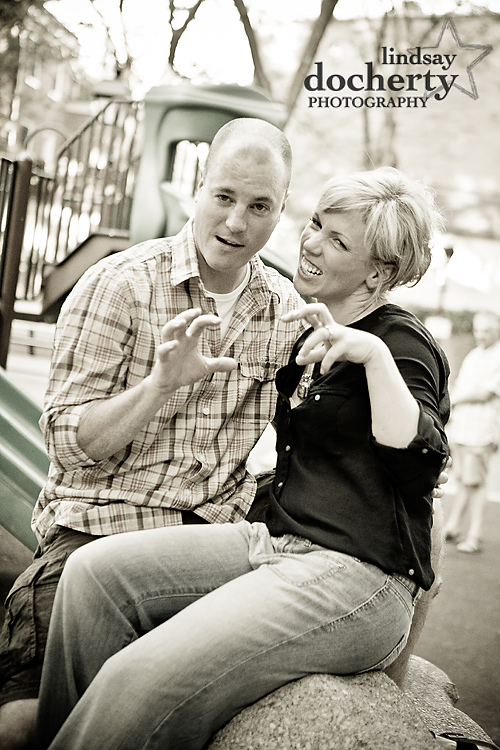 If you saw my August desktop image post, you’ll see that I was totally right on. 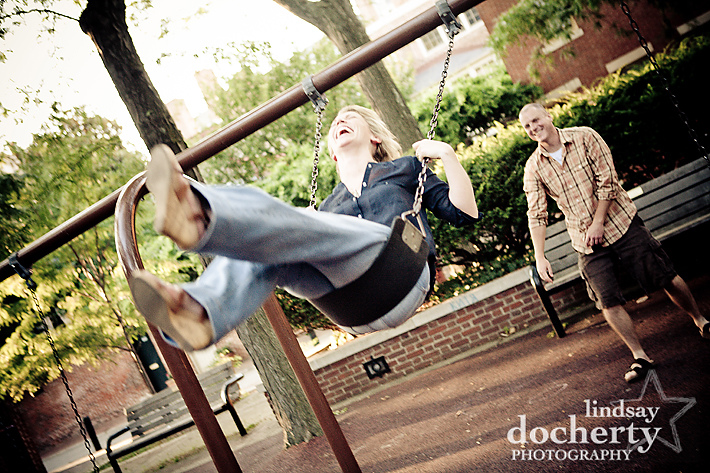 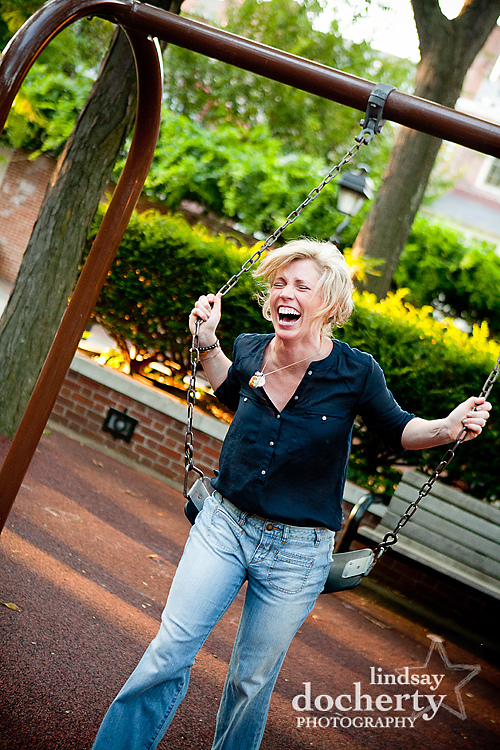 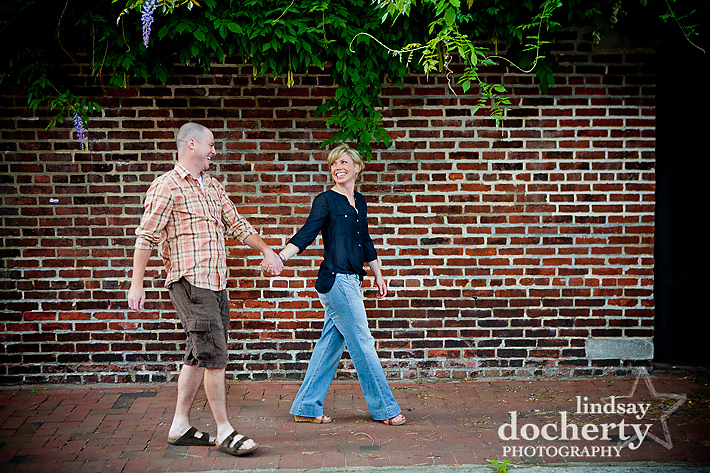 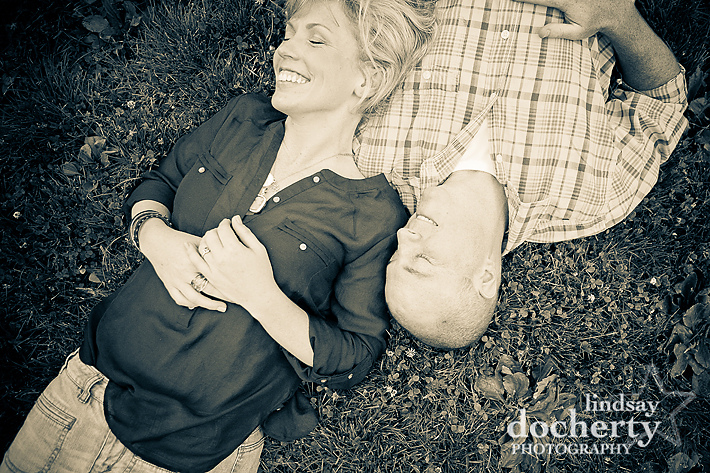 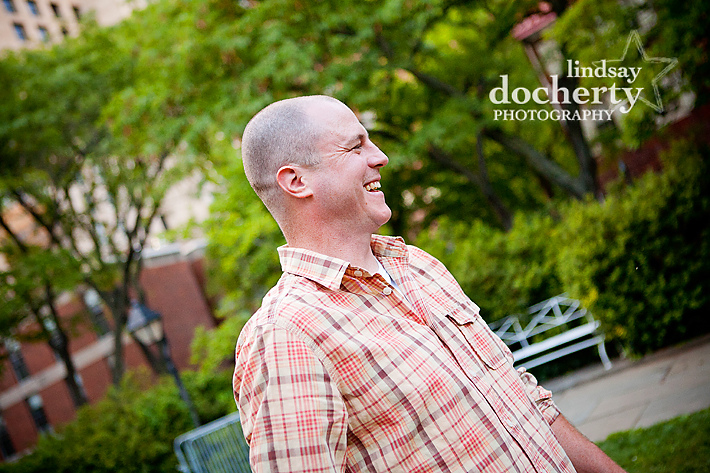 Check out this incredible engagement ring. This is a raw diamond that took about 8 months to find and create a ring around it. Completely unique and original. Brian proposed at Chanticleer. He told her to stand by her favorite flowers (turns out they were the wrong flower, but who’s counting?) and told her she looked good but she’d look better with this and presented her with the ring. 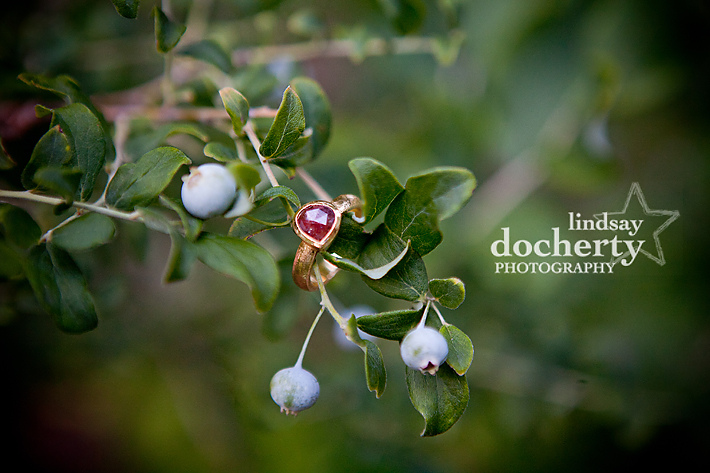 They’ve been together for 8 years. They met while working at the same bar and the story goes that she was wrangled into being his bodyguard and taking him to his car every night. I’ve also heard that she tried to get him fired but I’ll let them dispute that. What I know is that they’re fabulous together. 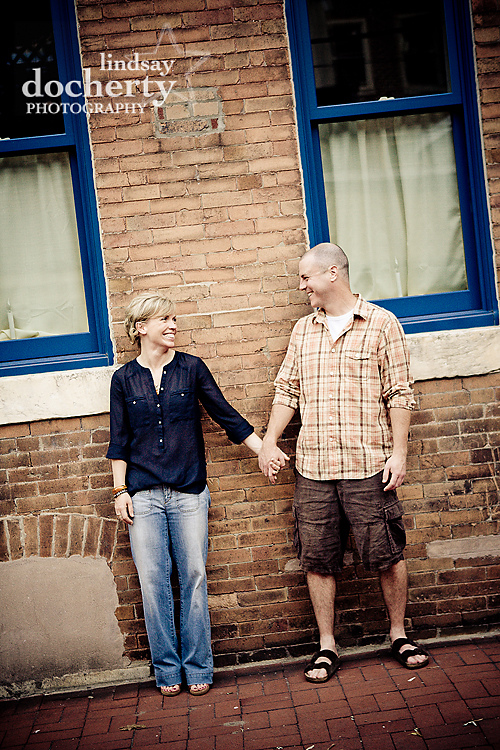 Clare and Brian, thanks for a great evening! I can’t wait to see what shenanigans we get into in October for the wedding at Rockwood Park. 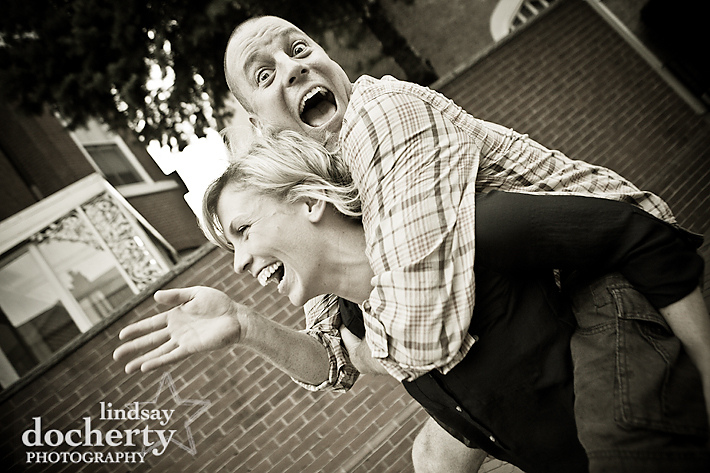 We cannot really love anybody without whom we never laugh. 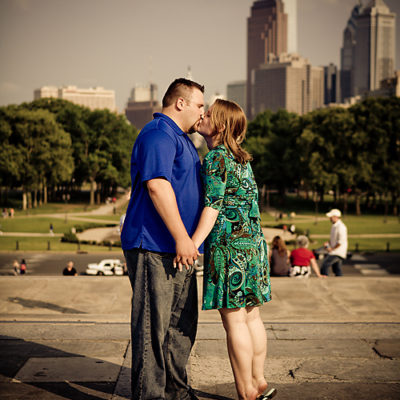 Emily and Chris are awesome. As I wrote before in the teaser post, these two are 100% goofy, 100% fun, and 100% in love. You'd better believe 300% means awesome.They live in the outskirts of DC and came up to spend time with friends and family and to have a fun romp around the Philadelphia Museum of Art for engagement pictures.When you're around the Art Museum, where is the first place to photograph? The steps, of course!And on a hot summer day there was no resisting the fountain just screaming for them to come in and play.I LOVE how Emily just nuzzles up into Chris. Totally smitten.Emily and Chris love the water. Chris proposed to Emily ...
Engagement June 10, 2010
June 10, 2010 ● Engagement
READ MORE 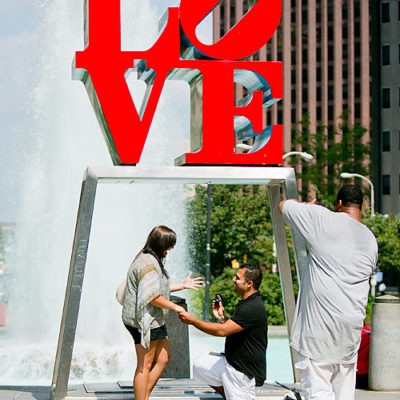 Did you get to photograph a live proposal this weekend? No?That’s a shame. Because I did. And it was fantastic despite the hustler in my shot! How typical LOVE Park is that?!Congratulations, Andrew and Teresa! Whole story coming soon!
Engagement July 30, 2012
July 30, 2012 ● Engagement
READ MORE 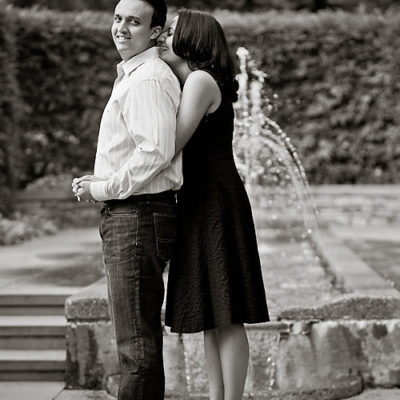