Neil was a best man at my own wedding.  He was a housemate with us for years upon his arrival from years abroad in the Netherlands.  My husband has known him since childhood.  He is the local expert on breakfast sandwiches and has connections to just about anyone in Philadelphia.

Kelsey is a bilingual teacher and child advocate/superhero/teacher.  She is a musician, an artist, drawing comics of daily life in our dear city and a First Person Arts StorySlam Champion (where they met, incidentally).  She finds facial hair a turn-on and lives for warm weather.

Kelsey had always disapproved of her parents’ anniversary, coming in quick succession with their birthdays.  She had strong feelings that it should be spread out to have more reason for celebration throughout the year.  Here she was getting married within a month-long stretch that was bookended by her birthday and Neil’s and it wasn’t even warm out!

Neil and Kelsey have been together for 4 years and had plans to have a wedding later this year.  Those plans were condensed into about 3 weeks when a new job offered health insurance for spouses but not domestic partners.  This meant pulling off a wedding in weeks in addition to transitioning to a new job.  First thought was City Hall – stress-free with a romantic elopement-y ring to it.  Then it snowballed.  Those were some hellish weeks for Neil and Kelsey.  It’s a situation I wouldn’t wish on anyone.

As her mother’s was too fragile, she had her own wedding flower crown for the occasion.

As these things seem to do, it all came together in the end through the efforts of a village.  Friends and family offered up the space, flowers, cake, dress, transportation, fur cape, and photography :wink:.

Kelsey and Neil hosted an intimate lunch at Parc for immediate family and almost-family.

The ceremony itself was held in the penthouse lounge of a friend’s Center City condo.  If it had been a smidge warmer, they would have had it on the roofdeck with breathtaking views of the city skyline.

A great sadness was that Neil’s parents in upstate New York weren’t able to join them.  His father was too ill and his mother needed to attend to him.  Thank you 21st century for finding a way for them to witness from afar!

As it was, the indoors with incredible floor-to-massive-ceiling windows gave us a beautiful (and warm) space that felt just right.  Guests surrounded them like a hug on sofas and chairs.

Kelsey’s sister surprised the couple with a string trio.  Kelsey’s mother officiated and her father played his guitar during the ceremony.

Afterwards, guests enjoyed the potluck treats, speeches, and views before Kelsey had to head out to host a StorySlam that night that had been planned before the nuptials!

It was a dizzying few weeks and a day that was a whirlwind of love.  I’m so happy that I could be a part of it (well, insisted if we’re being honest).  I love you two so much!

And darling I will be loving you ’til we’re 70
And baby my heart could still fall as hard at 23
And I’m thinking ’bout how people fall in love in mysterious ways
Maybe just the touch of a hand
Oh me I fall in love with you every single day
And I just wanna tell you I am
~ Ed Sheeran, “Thinking Out Loud” 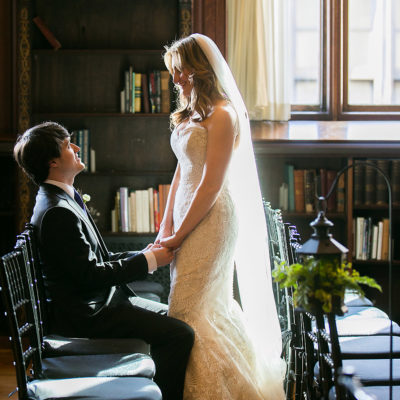 Britt and Paul on their wedding day were just as snarky and fun as I knew they would be.  It was a stunning nature-inspired wedding at the fantastic College of Physicans.  More soon!
Wedding June 10, 2015
June 10, 2015 ● Wedding
READ MORE 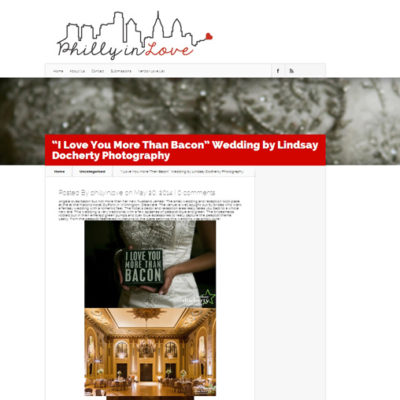 There is a new blog in town. Philly in Love is sweet as pie and features my marvelous couple, Angie and Jim, and their ultra-glamorous wedding at the Hotel duPont. Philly in Love is exactly what the name says: a focus on the intersection of the Greater Philadelphia Area and all things love – weddings, engagements, and great dates ideas.  I am so thrilled that they picked this extraordinary wedding as today's feature!Head on over to check it out!For my post from the wedding, go here.
Press May 20, 2014
May 20, 2014 ● Press
READ MORE 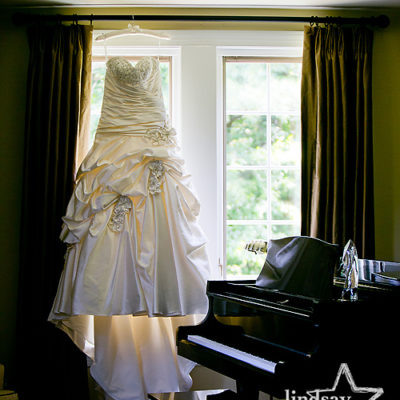 Andrea scrunches her nose when she laughs hard and John can’t keeps his eyes off of Andrea when she walks into the room. This all began in 6th grade when Andrea called dibs on the new guy. John asked her out in the parking lot of St. Norbert’s in 8th grade and it was there that they married a few weeks ago. Check out more of the back story of their courtship and engagement session pictures here.Andrea and her bridesmaids got ready at her parents’ house in Malvern. Her mother’s garter was her something borrowed and her grandmother’s handkerchief was her old and blue. Her incredible satin gown was the first one she tried on at the third sh ...
Wedding July 24, 2012
July 24, 2012 ● Wedding
READ MORE