Go check out The Fab Bride right now. They posted even more images from Mike & Stacy’s elegant Wedding at Stotesbury Mansion last month. It’s an awesome blog for all you Philly brides – it highlights tons of Philly-centric real weddings and plenty of wedding ideas. I am honored to have been asked to be a part of this awesome blog! 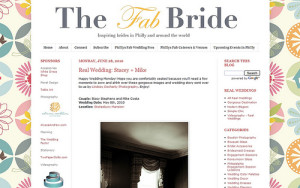 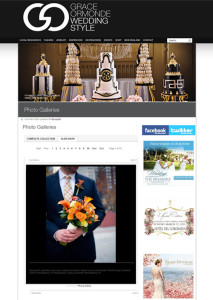 Grace Ormonde is THE authority on all things regarding über fancy weddings. I am completely thrilled and honored that one of my wedding photographs was selected to be featured in the Grace Ormonde Wedding Style Magazine’s inspiration gallery. They chose a bouquet image from Sara and Rob’s stylish Philadelphia City Hall wedding. If you haven’t checked out the utter beauty and elegance that is synonymous with the Grace Ormonde name, I urge you to do some clicking!
Press February 26, 2013
February 26, 2013 ● Press
READ MORE

So, so cool to have Bree and Scott’s red-infused military wedding featured on Bona Fide Bride yesterday! If you’ve never checked out this blog (based out of the Jersey Shore and featuring weddings from all over the country), rush on over and take a peek!
Press May 2, 2011
May 2, 2011 ● Press
READ MORE 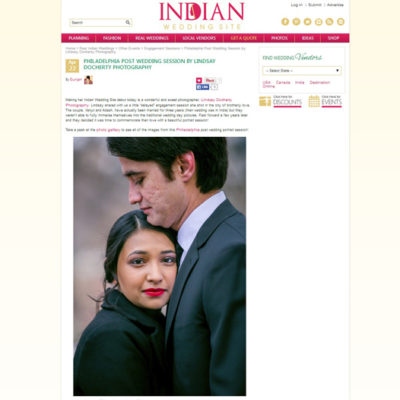 It is not every day that I get to do a love session after a couple has already gotten married but then Vanjul and Adarsh showed up and made me wish I had been there for their Indian wedding a few years earlier. I love that it has been featured on the wonderful blog, Indian Wedding Site. I am looking forward to seeing more of my Indian couples on there in the future! Here is my take on their Old City anniversary session!
Press April 22, 2014
April 22, 2014 ● Press
READ MORE