Oh. My. God. You should have seen Anna and Bill’s wedding – it was absolutely stunning! I went up to Northern CA with Lisa of Lisa Leigh Photography to be the second shooter at one of the most beautiful weddings I have ever seen. This is the stuff for magazines. As I’ve said before, I try to take advantage of as many shooting opportunities as possible and I’m glad I went along with Lisa for this one. 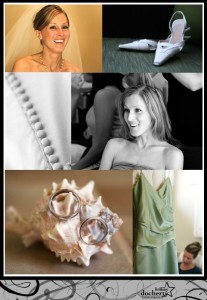 First of all, all eight (yes, eight) bridesmaids were beautiful. They wore flowy Vera Wang dresses in a light celadon (minty-green) with a bubble hem tied at the waist with a black velvet sash. The bride wore a strapless off-white gown with a similar hem and small buttons that went up the back. She looked dazzling to say the least. Here are just a few of the “getting ready” shots. In the midst of photographing the BM gowns, I found her maid of honor, also named Lindsay, sitting in the bathtub of the hotel, finalizing her speech. Classic! 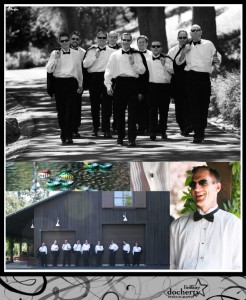 Lisa stayed with the women while I went off to see what the men were up to. What a surprise, they were sitting on the porch of the barn near the wedding site, drinking beers and goofing off. They were a hilarious (and handsome!) group and let me order them around. Those bowties look sharp on them but you can bet they weren’t tied any longer than they had to be. I had a really good time with the fellas, but the day – and drinks – had only just begun. 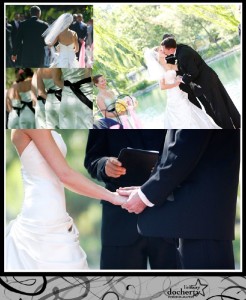 The ceremony site at Black Swan Lake was set up beautifully. It was next to the lake (and yes, there was a black swan there) and the actual service was under a big willow tree with roses tied to some of the branches. The bride arrived via vintage Thunderbird driven by her father and walked down a rose petal path to meet her groom. There wasn’t a cloud in the sky and the sun was out and shining but there were white umbrellas provided to keep the guests cool. Anna was grinning the entire time. 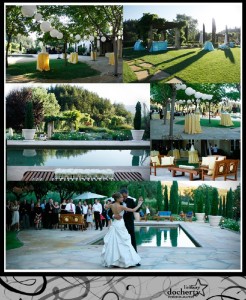 The lovely setting didn’t end at the ceremony. Afterwards, guests walked through grapevines to lush gardens overlooking the winery’s fields. Guests were treated to exotic looking passed hors d’œuvres and wine before moving up to the dining and entertainment area. There were white paper lanterns hung by the cake and upper drink station. There were two outdoor seating areas by the pool, that allowed guests to rest and check out the gardens as they became golden with the sunset. I don’t think I can say “stunning” or “beautiful” enough to describe this venue. The entire wedding party looked on as Anna danced with her father by the pool. 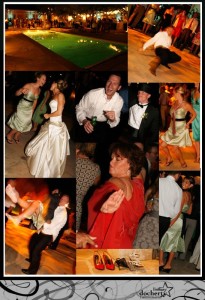 But you’d better believe the night went on late into the night. The crowd was slow to start shaking it on the dancefloor, but when they did… Well… Check out the pictures and tell me what you think. The wine flowed freely and the shoes came off as everyone got out there to the great band. I think Anna’s mom stole the whole show – she was out there in red and just shaking it like none other! There was stiff competition by some of the groomsmen who offered up some fancy footwork and even some breakdancing. 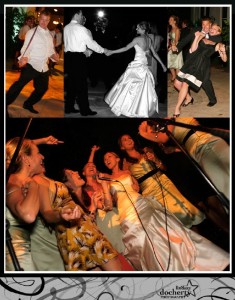 Anna was pretty demure the whole night. That is, until the girls got on stage for her sorority’s singing of Sweet Caroline. They were fabulous and had such a great time. The guests were crowded around the stage like groupies as the girls sang. Don’t worry, Bill and Anna made sure to get a few dances in too. 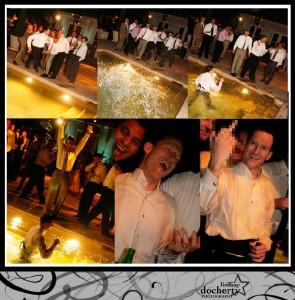 The night ended with a splash. With Lisa’s help, Bill’s work buddies gathered near the pool for a group picture. They are a devious group and ganged up to give him the heave ho into the pool. He was a really good sport and laughed it off, making sure his beer stayed out of the water the whole time. Come on, how could you have that pool plus a crazy fun group and an easygoing guy like Bill and not expect the groom to get dunked?

It was a great day and I simply couldn’t wait to get back home to look through the 2500+ pictures I took. Working with Lisa was a blast. She was a ton of fun and oh-so-professional. Well, kinda… 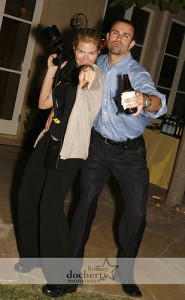 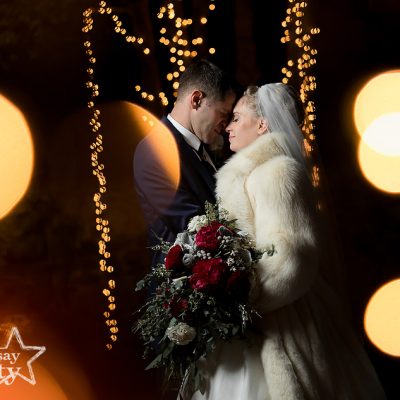 December in Pennsylvania is a great but difficult time for a wedding.  It’s cold, the daylight hours are few, the freezing temps hinder a lot of super cute bridal/bridesmaid dress options, and did I mention that it’s really cold?  (Maybe that was Mike talking.)  On the other hand, winter weddings have a crisp, festive feel with twinkling lights, evergreens, and beautiful nighttime moments snuggling close.  Perhaps you decide to have a winter wedding because your coffee shop is opening soon after and there’s no time for a break when you’re running your own business!  That’s how things worked for Ali and Mike and I feel very lucky that I was th ...
Wedding February 13, 2017
February 13, 2017 ● Wedding
READ MORE 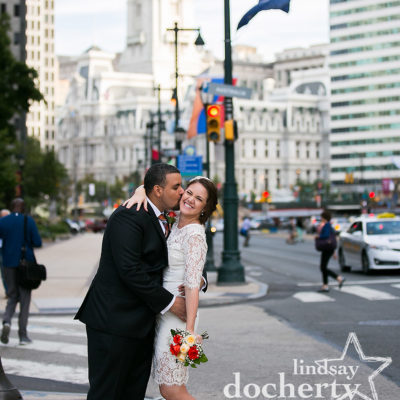 These Aussies took on another adventure after 8 years together: an elopement at Philly’s City Hall.  It was as a sweet a wedding as you’ve ever seen!
Wedding September 19, 2016
September 19, 2016 ● Wedding
READ MORE 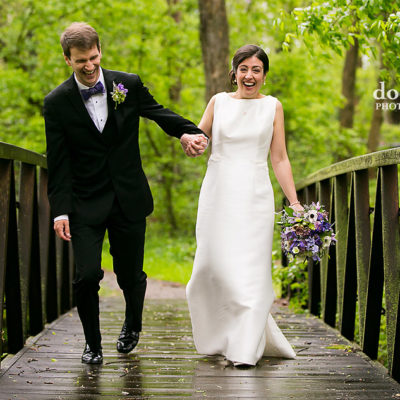 A bit chilly and wet but Drea and Steve’s wedding was oh so wonderful!  I can’t wait to share more from their completely personal and playful wedding day at Duportail House.
Wedding May 9, 2016
May 9, 2016 ● Wedding
READ MORE